This free of charge social initiative platform “Mana Balss” ( ‘My voice’ – Latvian transl.) allows for people to submit their initiatives and thus attempt to improve the general situation in the country and ‘troubleshoot’ by addressing issues they find worrying.

The basic procedure is intended to run the following way:

1) any citizen of the Republic of Latvia (16 years of age and above) submits an initiative (after authorizing through a state-registered online bank) to the online platform http://manabalss.lv/

2) you submit an initiative, stating what it is that you want to change, how you propose to go about achieving it and why this initiative is essential for others to support;

3) Within 24 hours your initiative will get feedback from a group of experts (if they are available, if not – go to step 4) who will let you know what’s still missing and how it should/could be improved;

4) Your initiative will then be ‘transformed’ into a link and it is up to you then to gather 100 signatures (via sharing the link on Twitter, Facebook etc) in order to confirm that the initiative that you are proposing actually matters to others, too;

5) After this has happened, the lawyers of the platform (note: these people are volunteers, so it might take time) will check your proposal in order to make sure that it is legally applicable, isn’t unconstitutional and would serve as an actual solution to the given problem;

6) Then, once this is confirmed, 10 000 signatures have to be gathered for the initiative to be brought to the Parliament for discussion (we will describe the unusual petitioning procedure in place in Latvia in some later post!) It is then, of course, down to their discretion to make a decision whether the initiative passes or not.

It is the straightforward manner in which the initiative allows the general public to make a real difference (essentially, three relatively simple steps) that captivates attention the most. It is normally assumed that bringing an issue to the government for discussion is a complex endeavor and can be achieved only by jumping through bureaucratic hula hoops or alternatively making lots of noise in the public realm. This initiative provides a much more comprehensible way of participation and hence (or so the hope is) will eventually increase civic activism in the society. 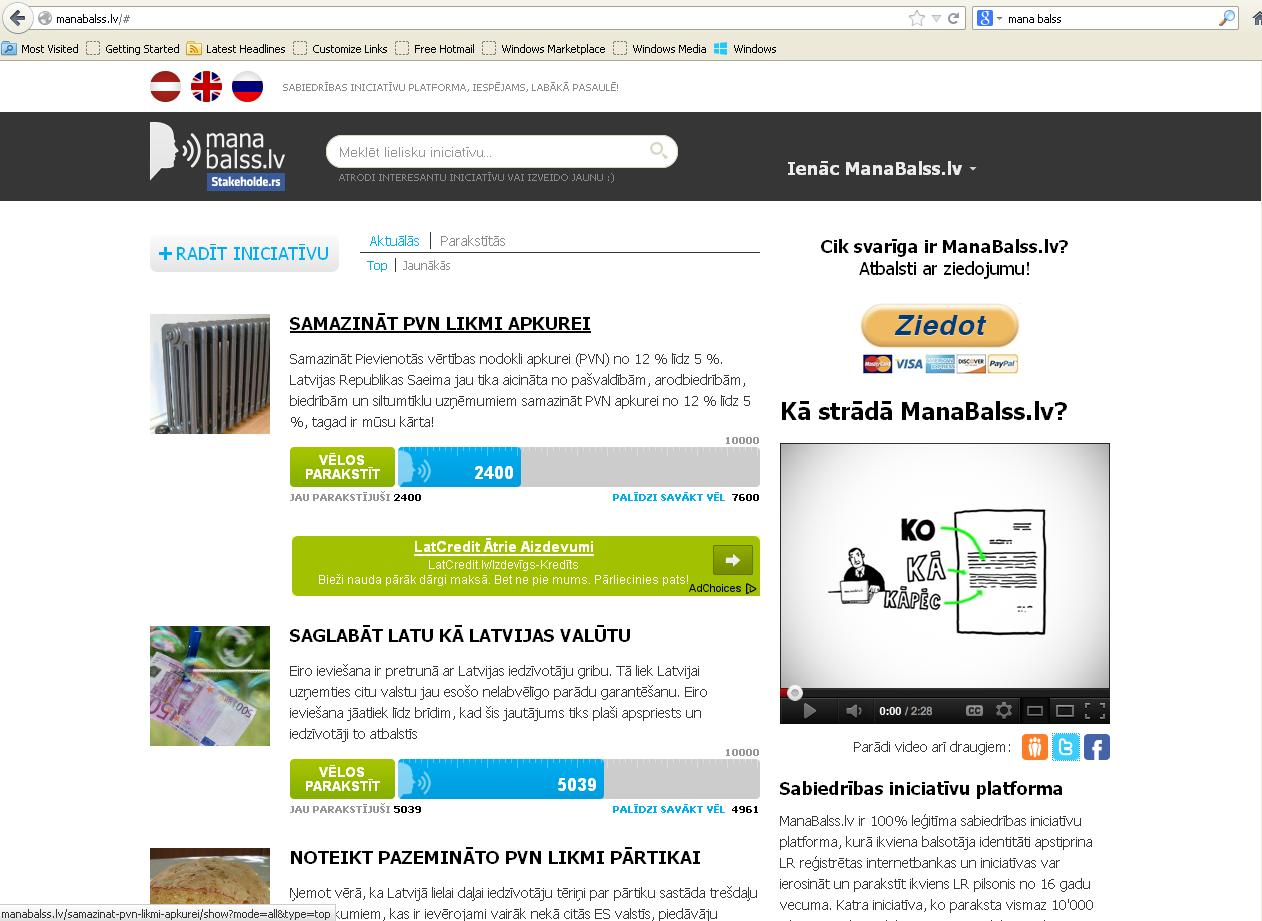 And for those of our followers who are Latvian-speakers, here is a promotional video of the platform (english subtitles are should be avilable on youtube):

However, echoing criticisms of the European Citizens Initiative, where critics have raised concerns concerning initiative turning into mob rule, it could, in theory, be argued that no serious, well – researched proposals will come out this. In a way manabalss.lv both confirms and disproves this argument: even if new initiatives are submitted almost daily, not that many of them get to the 6th stage when they become public. And, when they are, they are usually quite well developed (though there have been some exceptions). But it has turned out to be challenge to find volunteers in order to crowdsource the “quality – control”.

You can see the short history and overview of the most popular initiatives on manabalss.lv in the presentation by Iveta HERE.

Now, we expect, more than hope, that the number of creative and purposeful initiatives proposed on the platform will increase substantially in the near future and that, with this channel being there, civic participation rates will go up as a result.

[Indra, with small additions from Iveta]