Musuvalsts.lv is a Latvian platform for crowdsourcing policy ideas.

Do you have an idea on what would motivate those people who have left Latvia to return? Post it on musuvalsts.lv! Maybe you know how to unite Latvian ethnic groups? Share it with other visa musuvalsts.lv! Other people will comment and vote on your idea.

That’s the basic idea of Manabalss.lv platform. As simple as that!

Here is a snapshot of what it looks like: 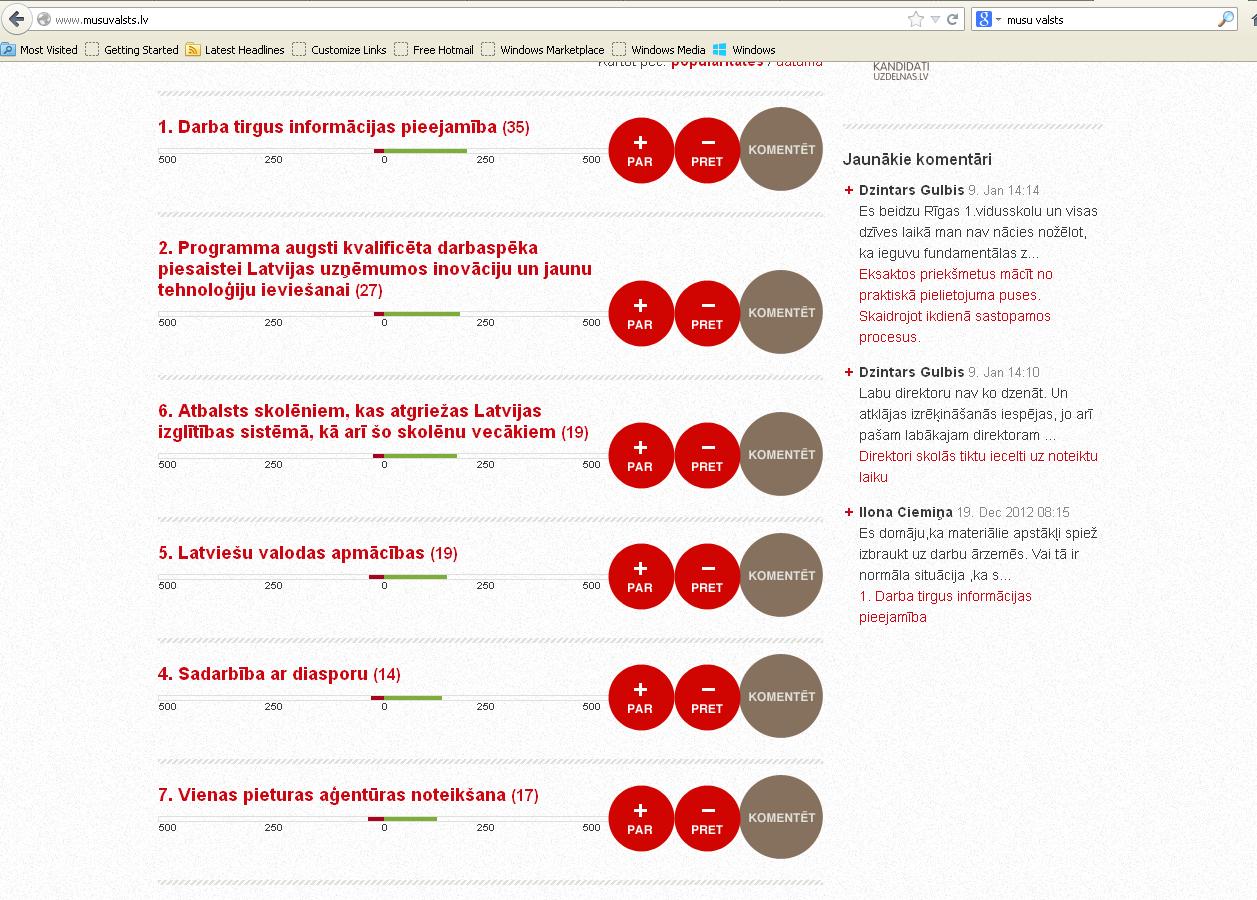 Musuvalsts.lv initiative was created on September, 2011 (prior to extraordinary parliamentary elections; we were probably the first nation on the planet to dismiss a parliament via referendum and call for extraordinary elections!) with a purpose to encourage the general public to get involved in a constructive discussion. The main objective was to ensure that the leading politicians take into account suggestions initiated and supported by the general public.

The vision underlying the project is to generate innovative ideas amongst members of the general public, irrespectively of the social networks or websites they use, so as to propose new legislation, as well as amend existing laws that aren’t functioning particularly well. The discussion platform itself was created by the Latvian social network draugiem.lv (often referred to as ‘the Latvian Facebook’) and has other Latvian web portals ( inbox.lv, tvnet.lv, delfi.lv un kasjauns.lv) involved as participants. Right now it is hosted by Centre for Public Policy PROVIDUS.

The hope was that, instead of anonymous complaining in the commentary sections of different news portals, the opinionated and active members of general public will use this platform for constructive debate and discuss matters that need urgent attention. At the same time, the web platform would also serve as a ‘meeting point’ for people who on daily basis use different social media networks and are all brought together here.

But how does it work in practice?

The idea crowdsourcing process gets activated whenever there is a respectable NGO or state agency that wants to crowdsource ideas. There is only one consultation process at a time. For example, at the moment (26.01.2013) you can see that a consultation on remigration (basically: bringing people back to Latvia!) has ended. It was a well-organized joint public – private sector endeavour.

Beginning in 2012, the Ministry of Economics of Latvia organized an expert working group on remigration: in autumn 2012 this working group came up with 7 suggestions. These suggestions were then subjected to public consultation – both, in traditional way and via musuvalsts.lv. The visitors of musuvalsts.lv could both vote and comment on those suggestions and make their own recommendations. As you can see, approximately 30 additional suggestions were made (there were more than that, but similar proposals were grouped together) and then given to Ministry of Economics! They needed this consultation in order to create a work plan on remigration.

We do not yet know what the Ministry has done with those suggestions, but we will try to keep you up-to-date!