The process of decision-making in the European Union (further – EU) has always been complicated. Such factors as several revisions of treaties changing the essence and procedural means of legislative process, an effect of the “black box” and differences in hypothetical assumptions about strategic players at the EU Council’s arena have to be taken into account.

Whereas the number of the small member states (further – MS) represents numerical dominance in the EU it is arguably that when national voiced are combined to shape a common EU voice, these small MS might feel ‘less heard’. And for Latvia to be holding a presidency in 2015, it might turn to be an extra opportunity to try its potential at the EU stage. As the Speaker of the Saeima (Parliament of Latvia) Āboltiņa has once emphasised

[1]: „Latvia’s presidency has to be a wise presidency; the list of priorities has to be compact and specific; at the same time, it must ensure a balance between national and European interests. We have to keep in mind our priorities; however, the presidency cannot be successful unless it contributes to the EU’s development and strengthens its position in the global arena”, there is a question to be asked – if there are still options for us to influence the EU policy-making and not only by joining coalitions formed by the large MS.

The main pressure for small MS is not in uploading their own particular interests but rather about large MS becoming too influential when it comes to the institutional affairs, especially, establishing informal contacts with the Commission and negotiating before the voting level. Nevertheless, several positive outcomes addressing success of small MS show that they could perform not only the role of “losers”, but also the one of “winners”. Finland’s strategy proved to be beneficial as Finnish representatives actively lobbied all counterparts and regularly accentuated the importance of the Northern dimension for the future of European integration and its connection to other EU policies. Although nobody would expect Denmark to exert much influence over the rapidly expanding supranational power of the EU, especially as qualified majority voting was extended, the Lisbon 2000 summit reflected the engagement and activism of Denmark as full employment and poverty reduction became explicit goals for the EU.

Nowadays small MS often choose to improve negotiations with the Commission looking at it as a key partner in their attempt to build coalitions and thus try their utmost to get the Commission on their side before facing the large states in the Council of Ministers. Additional mechanism is the Presidency of the EU which offers a valuable opportunity to play a major international role not only on behalf of the EU and other MS but on the wider world stage. This was the case of the Belgium Presidency in “the war on terrorism” and the autumn of 1999 Finland, which held the Presidency for the first time, found itself in the centre of attention worldwide due to the war in Chechnya.

Overall, these factors could ensure the successful participation of small MS in EU decision-making. However, nobody must await from them such activities in all areas of policy making due to limited resources.

To illustrate the possible participation of small MS an analysis of certain number of legal acts [3] adopted by qualified majority voting in 2007 – June 15, 2012 (after 2 significant enlargements) was made. Qualified majority voting procedure has been chosen to demonstrate the potential power of small MS in unequal compared with unanimity positions. 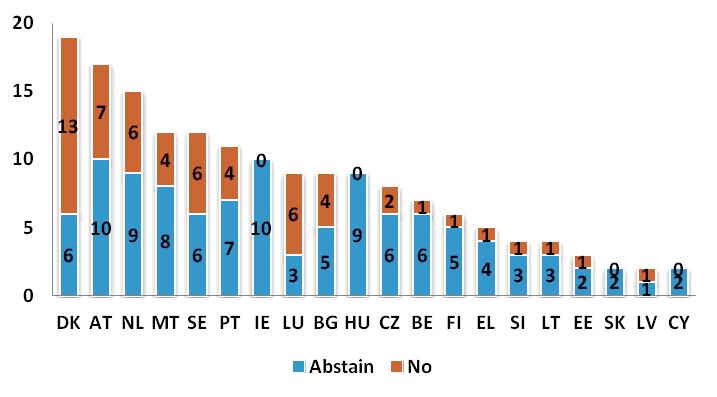 Current research shows that no obvious coalition between small MS on a basis of geography, economic development, entry of the EU date or ideology at the level of the Council of Ministers could be discovered. There is a large amount of proposed legal acts which have not reached the stage of official voting because of relatively high assumption to be outvoted. Thus, coalitions of small MS are very possible regarding these proposals. In contrast, data on this information could hardly be collected in a transparent way at the Council of Ministers home page.

Therefore, the following conclusions and recommendations can be drawn:

1. Due to very limited number of votes that each small MS has at the voting stage to outvote a coalition of large MS at other levels such as Coreper before the Ministers’ level matter.

2. EU institutions offer a reliable forum where small MS can gain information about the actions and preferences of other states – small and large. Institutions also give small MS an opportunity to influence of compliance of powerful states to joint decisions and rules while emphasizing their own input in common projects. Latvia could have a stronger voice as long as it can present innovative initiatives stressing its importance for all MS involved[4].

3.Small MS should not focus on all issues on the EU agenda due to limited personnel and financial resources. Thus, Latvia’s participation is to be limited to few preferred areas.

4. Unions of small MS based on a territorial principle could benefit from the outcome of the voting procedure in favour of interests of small MS. However, these preconditions of better participation of small MS do not increase homogeneity among them. Thus, Latvia should continue cooperation with its strategic partners and not to search for new ones.

5. Latvia should improve informal contacts with the Commission not only at the political but at the EU officials’ level.

6. The role of the Latvia’s presidency in 2015 is to be kept as the highest challenge, which still depends much on events on the international and the European area.

[2] The EU and the Millenium development goals, http://ec.europa.eu/europeaid/what/millenium-development-goals/index_en.htm

[4] Tunkrova L. (2008). The power of small states in the European Union: the case of Finland and the Northern dimension policy. Comtemporary European studies, Vol.1, p.8.