This recession is often compared to the Great Depression of the 1930s. According to some interesting data here, Latvia has done vastly differently back then. Check out the indices of industrial production in the table below. From a base of 100 in 1929, the index of industrial production decreased to 82.4 in 1932, then recovered to 111.9 in 1933, and then jumped to a remarkable 161.1 in1937. Latvian economy has done very well compared to most other countries in that period. Sweden, for example, experienced only a modest contraction, but by 1937 it only got back to it's 1929 level of industrial output.

By the way, in this global recession Latvia’s industrial output experienced 23.4% year-on-year drop in March 2009.

Going back to 1930s, I really don’t know what explained the recovery of industrial output in 1933, but I might have a clue to what explained this really spectacular performance in 1937. On September 28, 1936, Latvian lat was effectively devalued by some 40%. It seems the contemporaries of Ulmanis knew a thing or two about economics. 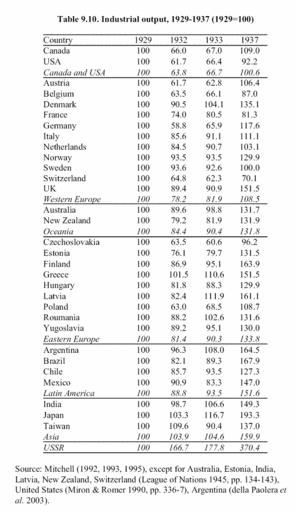