Our take on online debate platforms like [i]Debating Europe[/i] and their potential.

In the post about European Parliament elections we talked about how online platforms help to make European politics more comprehensible and engaging. However, the roots of any position of a political party or MEP – be it national or European – still lies in that uneasily definable space of news, opinions, commentary, trends which constitute a public debate. In other words, it is difficult to have politics without a space where those different positions are established in the first place and which then are crystallized into concrete political decisions. It also highlights the issues that are of most concern to the particular society. Europe is said to have limited space for such debate, as reasons accounting lack of common language, institutions (e.g. European media) as well as the fact that the citizens’ deepest interest and understanding belongs to national politics. Can the online platform Debating Europe, which allows anyone to start a discussion on basically any topic as long as it remains connected with Europe, be a significant step in the direction of creating such space?

Idea of how Debating Europe works is quite simple: anyone who is interested and has prepared a question or comment that has significance in European context can submit it in written form or via video message. Then ‘’Debating Europe’’ team takes up a pertaining question and reaches out to politicians and experts that are associated with this particular issue. Sometimes publicly heated topics are first posed in the platform for users’ response, most popular are then taken for policy-makers and experts to discuss. In the result, the impetus given by any platform user can be developed in a full-scale debate where the opinions of different sides are introduced, creating better insight into a particular matter and giving more solid base for further discussion in the comments section. 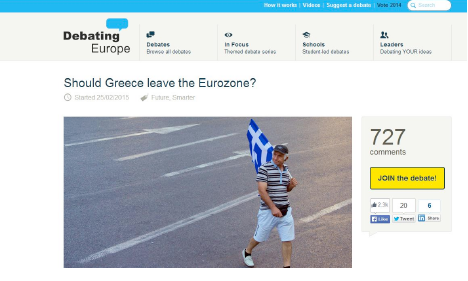 Themes that have been discussed in ‘’Debating Europe’’ are very diverse and it shows that European public sphere can be very much alive as there are so many aspects – political, social, economic, environmental, ethical, and cultural – to be examined in reference to the communal life of Europe. One of the recent examples concern the Greek economic crisis and the referendum in which the Greek people voted ‘’no’’ to the debt refinancing plan prepared by the European institutions and the IMF. This event sparked a serious debate about the member state’s sovereignty and the rules of the EU as a political system itself. ‘’Debating Europe’’ has closely followed the developments of the Greek debt crisis, inquiring its users about its possible solutions, heeding on the conversation whether the Greek debt should be forgiven as German debt was in 1953 (attracting great interest by the users which posted more than 1500 comments in response), asking should the Greece leave the Eurozone. Here, for example, their differing opinions expressed Manfred Weber, a MEP and Chair of the centre-right European People’s Party, American economist Barry Eichengreen as well as Stelios Kouloglou, a MEP from the Greek governing Syriza party. There were several other discussion threads about Greece which all were very actively received by the users, and presented both viewpoints of experienced observers and participants, both opinions of ordinary people across Europe. 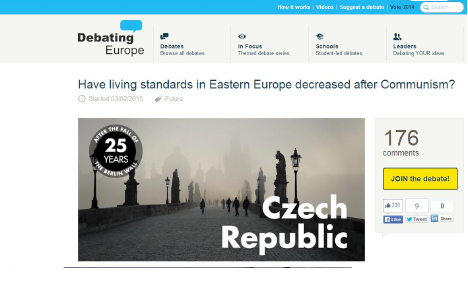 On ‘’Debating Europe’’ radar are various issues, and the most acute political issues are just a part of them. One of the more sociologically reflective debates that highlighted the gap between expectations and reality in the former Soviet bloc countries was dedicated to a theme-debate series ‘’25 years after the fall of the Berlin Wall’’. Debate Have living standards in Eastern Europe decreased after Communism? was initiated in response to the comment of one of the users Hrovje who argued that ‘’Life in many former-Communist countries is worse than 25 years ago, especially countries in Eastern Europe and the Balkans. They have many social problems, including huge corruption, nepotism, and fake democracy.’’ His argument was discussed by Czech academic, a journalist, and the Ambassador of the Czech Republic to the EU as well as debated by other users. 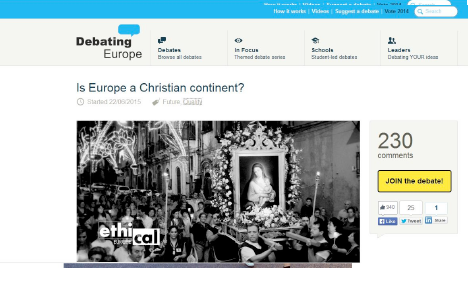 Along conversing on the EU political topicalities and the broader socioeconomic tendencies of Europe, ‘’Debating Europe’’ gives quite a lot of attention to social, cultural, and also ethical questions for people to talk through and see different sides of the issue. There have been debates about whether the euthanasia should be legalised across Europe or should all EU states recognise gay adoption. This is significant if we consider that in the more regular debate social and ethical questions are more accounted to the national than European perspective. Thus an online platform as ‘’Debating Europe’’ can be one of the few well-equipped channels to discuss these issues.

‘’Debating Europe’’ is a unique platform in Europe and probably even in the wider scale. In regard to Europe it gives a platform to discuss important issues from a starting-point which is unmistakably European as it engages participants from different professions, interests and national positions. But also beyond, online debating platforms can prove to be a tool with increasing importance in today’s democracy.