Our take on CHANGE.ORG - not your ordinary civil society organisation.

A $25 million investment from around twenty different tech figures, including Microsoft founder Bill Gates, Twitter co-founder Evan Williams, Palantir co-founder Joe Lonsdale, former Facebook CFO Gideon Yu and others, is not the typical funding source for the ordinary organisation supporting civic activism. Yet Change.org is not your ordinary civil society organisation as it is formally a for-profit corporation. Citing the advantages of “speed and scale” Ben Rattray, the chief executive of change.org, founded Change.org as a profit-making business while committing to reinvest all of its profits.

Technically Change.org is registered as a Benefit Corporation or B Corporation (or simply B Corp), which means that in addition to maximising shareholder value a corporation commits to making a positive social and environmental impact on the world. Instead of relying on donations or member contributions, the global petition giant relies on investors and sponsored petition recommendations. Petition initiators will pay Change.org to display their petitions as a suggestion after users sign other thematically related petitions. To borrow from Klint Finley writing for Wired, 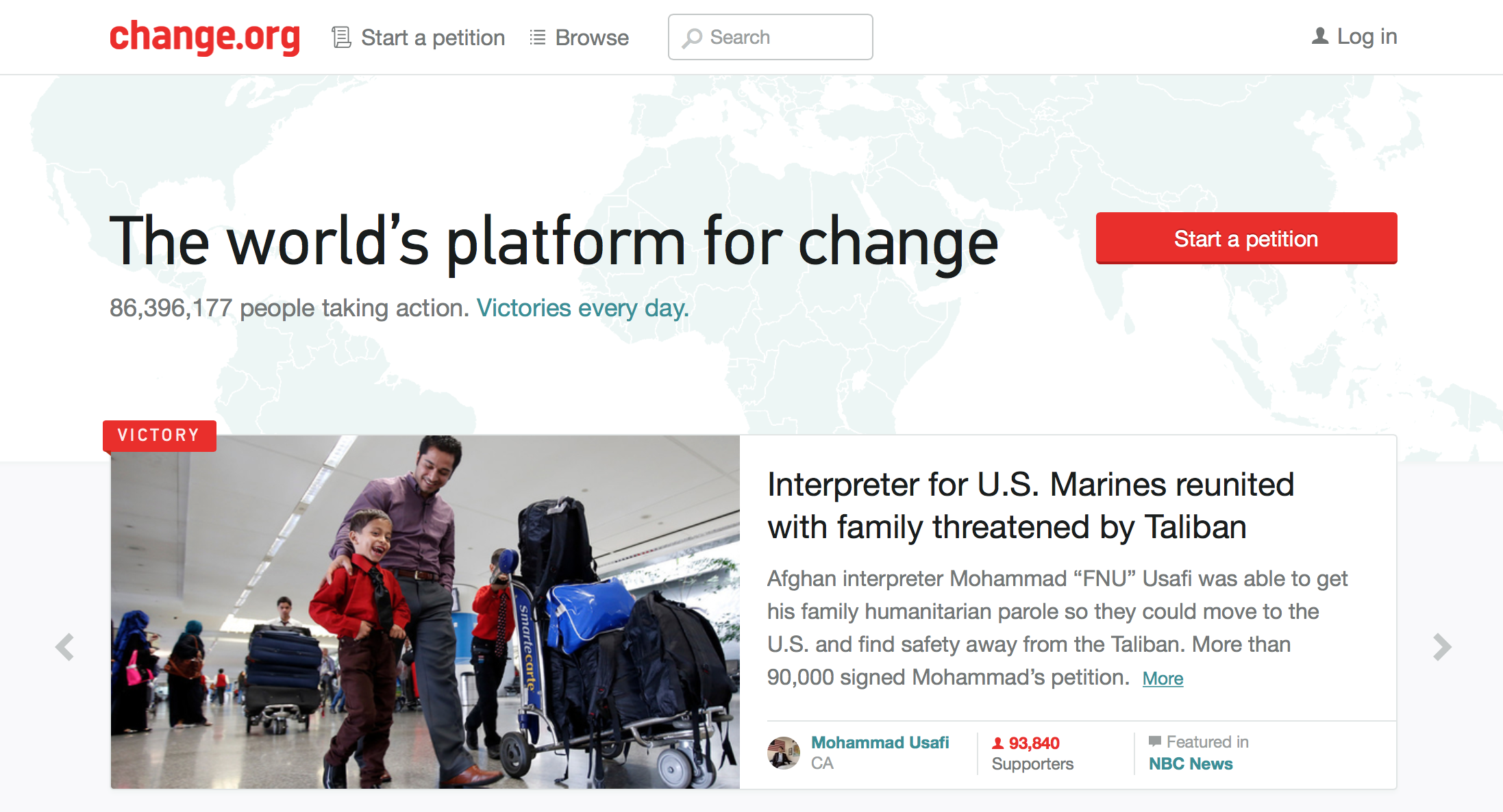 The incoming money has allowed Change.org to become one of the go to sites for petitions (with the non-profit Avaaz only generating half the traffic), the website attracts around 20’000 petitions per month and they have offices in 18 countries. Notable successes include petitioners convincing Southwest Airlines to cut ties with SeaWorld on the grounds of animal cruelty charges, and a recent petition contributing to the FDA allowing Tekmira Pharmaceuticals to fast track drug and vaccine research for Ebola. Having said that, there is still some way to go in measuring what impact their petitions actually have. One way of going about this is to look at the number of people signing successful petitions, which reached 1 million in 2013 in the US alone. Yet it would be even more important to measure the responsiveness of businesses or governments. One step in this direction is the company’s plan to implement a voting system for petition responses, but commissioning case-by-case impact reviews for the bigger petitions would be a welcome development.

There are those that express concern over the ‘email industrial complex’ that sites like Change.org are creating. Given the suffix “.org,” which is usually not used for commercial enterprises, it’s not hard to imagine that many signatories are not aware of their petition-signing histories and emails being sold for profit. Just the same, the recommendation system isn’t without its flaws. It fosters users to gravitate towards petitions that they would agree with anyway and favours big non-governmental organisations with the funds to promote their petitions.

At the risk of enraging the traditional left, there’s nevertheless something great in the way that Rattray talks about what he wants Change.org to become:

“The psychological effect we want to have,” Rattray said, “is when someone walks outside right now and says, ‘I want to rent an apartment, where do I go?’ Craigslist. To buy a book? Amazon. To address child slavery or climate change or stop the closure of the local park next to me? Change.org.”

His main point here is clearly about him wanting Change.org to be the go-to place for petitions. However, I like the mental image he creates. That in our consumer society civic activism would be in the mainstream, that keeping companies and governments in check would be just as casual an activity as purchasing underpriced books online or overpriced coffee at Starbucks. On that note, go and watch this inspirational video with all the good that people managed to accomplish using Change.org in 2014.