Our take on campaign body 38 degrees

38 Degrees was intended to create a UK campaigning body that would serve a similar function as MoveOn in the States, GetUp in Australia or the global Avaaz. It would not be entirely correct to describe these websites as online petition sites only, rather they aim to filter out causes with the greatest potential and then focus on creating strategic online and offline campaigns for targeted impact. In the past years the UK’s 38 Degrees has been singled out as one of the most notable online activism groups that might soon be constituting ‘the real opposition’ in British politics. Their clever name, “38 Degrees,” which refers to the angle at which avalanches begin (I’m giving them the benefit of the doubt on this bit of science), also adds to their appeal.

38 Degrees is run by a small office and the agenda is set by 38 Degrees’ member community, which simply refers to those people who have registered on their website by signing up to attend a local event or signing a petition.

The process starts with the 38 Degrees team gathering together suggestions from the comments on their website, blogs, Facebook and Twitter in order to create a shortlist of most consequential issues. In addition, the team tries to add any issues that might be of interest to their members by keeping a lookout for any urgent matters in the media and with the help of researchers or campaigners in other organisations. Afterwards, depending on time constraints, they either try to poll the entire membership or create a targeted poll with a random selection of members. Once campaigns are chosen it’s again down to members to decide whether they will want to support the cause. If enough members show their support by signing up to the campaign, the 38 Degrees team will then invest proportionate resources in advertising, fundraising and direct contact with relevant politicians or businesses. 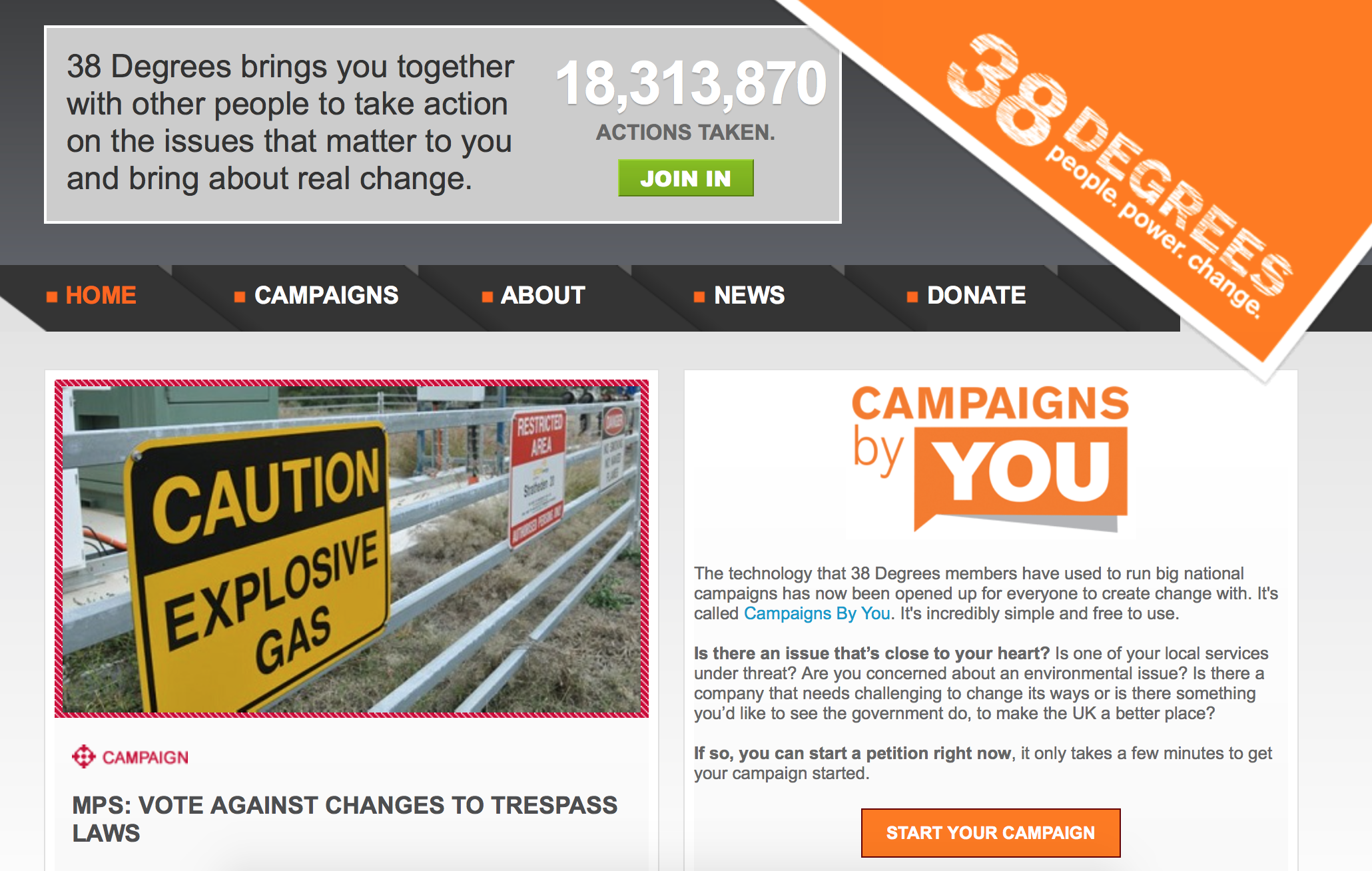 Recently, though, they’ve also added Campaigns by You, a new feature on their websites that allows members to start their own campaigns directly without putting their ideas through the process described above.

The organisation strongly expresses its commitment to being a non-partisan body, while their value commitments (“to defend fairness, protect constitutional rights, promote peace, preserve the planet and deepen democracy”) and the majority of the causes championed by the team do seem to reflect more of a left-leaning progressiveness than some conservatives would like to see. Yet their funding is not directly tied to any of the big parties and is entirely member-based, donations averaging at around £12.00. Their most prominent campaign that deserves credit for its cross-party cooperation fought to stop the privatisation of publicly owned forests and was supported by both Conservatives, such as MP Zac Goldsmith, and other more likely candidates from the green-leaning left. The campaign gathered more than half a million signatures and convinced the Conservative government to Conservative government to withdraw its plans.

Above all, what is great about the work of 38 Degrees is that despite them using the full potential of online technologies they also try to keep their feet on the ground by organising occasional member meet-ups, facilitating locally organised events and engaging in offline advertising and door-to-door campaigning.