Government purchases of goods and services – a huge industry estimated to be worth ‘between 13% and 20% of GDP on average worldwide’ (OECD) made with public funding for the public good. Yet it remains as one of the more opaque state operations.

Rooted in the commitment to opening up governments the Open Contracting Partnership targets government procurement procedures and aims to reduce corruption as well as inefficiency. In its essence open contracting refers to practices that increase the disclosure of information and promote public involvement in procurement procedures. In practice this can translate into a publicly available online database for contracts, past and present, and consultations with local representatives or civil society groups throughout the contracting process. 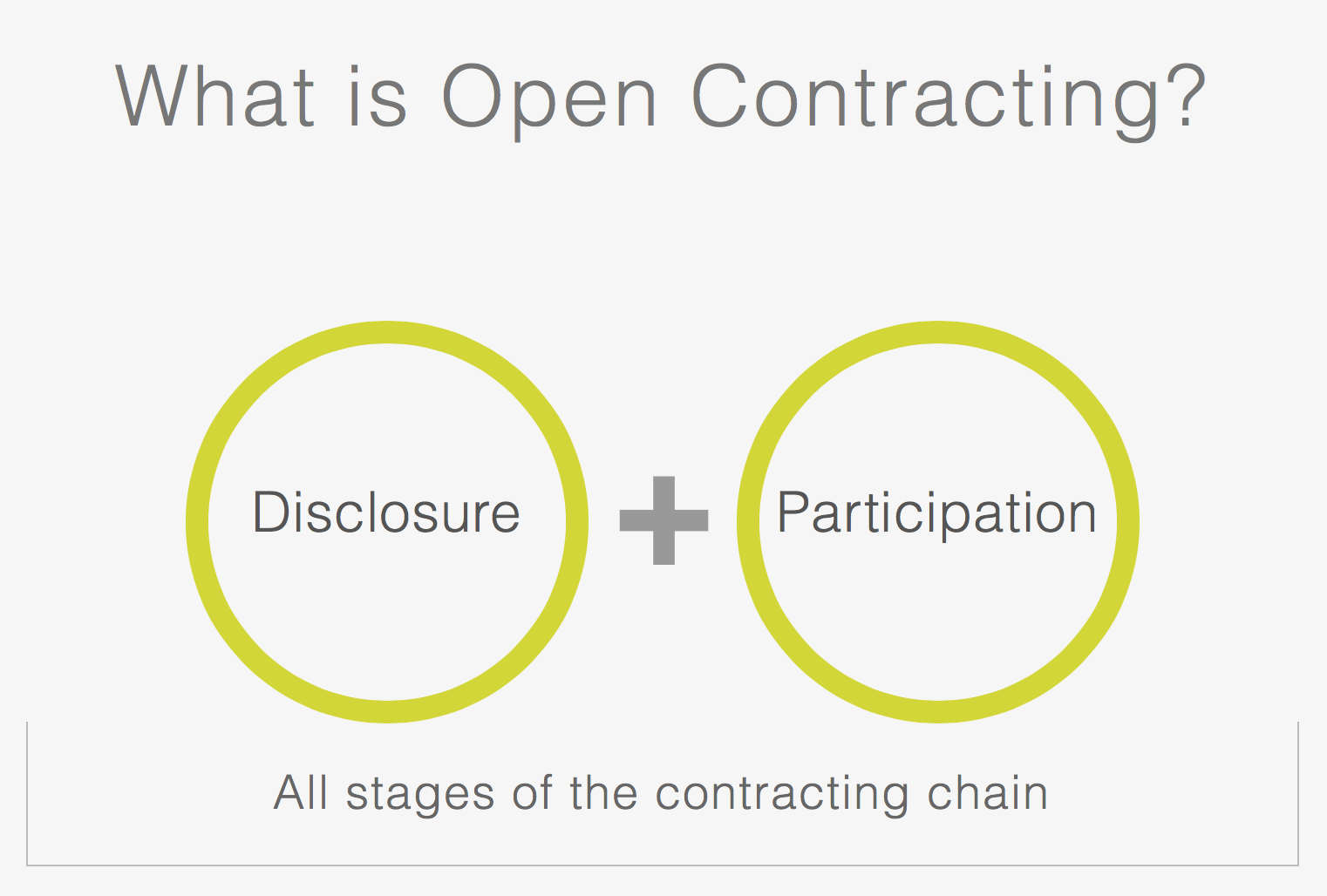 While the seemingly obvious target of the open contracting movement is corruption, it can deliver more efficient public competitions and better quality outcomes.[1] Having publicly accessible databases can enable bureaucrats to borrow good practices in contract design from other states as well as make the bidding process smarter – companies with access to previous contracts can make better decisions when deciding whether to take part in a competition or not. Just the same oversight can alleviate poor execution of services or delivery of goods – if civil society groups and the media can raise the alarm when known costs are overrun or resulting services do not follow specifications, the possibility exists to bring the responsible actors to account.

What is especially noteworthy about the Partnership is its initial focus on the extractives sector. While corruption is debilitating for any democracy, fledgling democracies can see their progress reversed with the discovery of valuable natural resources. What is sometimes called the ‘resource curse’ is not only an economic ailment but a disease of the political system as well. Rents from natural resources can compromise the political system by creating the opportunity for the reigning leaders to use revenue to retain power (through outright vote-buying or by backing favourable public sector officials).[2]

Public contracts are one of the remedies suggested by such experts in the fields of development and natural resource management as Paul Collier (other necessary ingredients being an active civil society and vigorous media). Such interventions cut directly through the malicious relationship between highly valuable natural resources and the performance of a political system by cutting off the private pay-offs of resource extraction.

One of the more comprehensive electronic databases for public contracts can be found in Colombia, namely its Electronic Public Contracting System or SECOP (see “Publish What You Buy”). What makes SECOP stand apart from other systems is the disclosure of all the relevant information pertaining to any particular contract (except for discrepancies that arise when researchers have previously tried to access contracts relating to the ‘Carousel of Contracting’ scandal in Bogotá). A typical contract entry will include the personal information of officials involved in the project, their salaries, tax payments, company fees, as well as any costs of services or materials.

An example of a successful intervention closer to home comes from Lithuania where their branch of Transparency International won the Promoting Transparent Contract Award in 2012. After realising how widespread undisclosed public procurement actually was, Transparency International Lithuania launched an investigation of unannounced tenders. Following their initiative legislation was amended to limit the use of such tenders, with clear requirements to publish the relevant justification whenever an undisclosed tender is used, for example in cases with formidable time constraints or sensitive content.

All in all, it is very likely that states will often already be publishing some information online regarding the main details of public purchases. Yet to reduce corruption in public contracting and to achieve better quality outcomes, states need to go one step further by implementing an open process of contracting instead of publishing retrospective reports that do not offer enough information to allow sufficient scrutiny by the public.