In this post, we will again look at the German-speaking countries of Germany, Austria and Switzerland.

How is the situation in these countries concerning so-called ‘’Voting Advice Applications’’ (VVAs)? VVAs are online tools trying to help you with the decision how to vote in an election and have increasingly gained popularity in many countries across Europe. How do the German, Austrian and Swiss applications work, how do they differ and how useful are they actually?

The application now basically works in a very simple way: on the basis of the party programs before an election, the Wahl-O-Mat team selects 38 central issues which are transformed into simple statements and put into a questionnaire, which is submitted to the political parties. Whilst the statements often refer to very general issues (e.g. Germany should leave the Euro), some of them, especially concerning federal state elections, can also be rather specific (e.g. a certain harbor in the federal state should be expanded). The parties then state whether they agree or disagree with the statements or are in a neutral position. Once the questionnaire is put online, the user can click through the statements and also respond to the statements with ‘’Agree, Neutral, or Disagree’’. 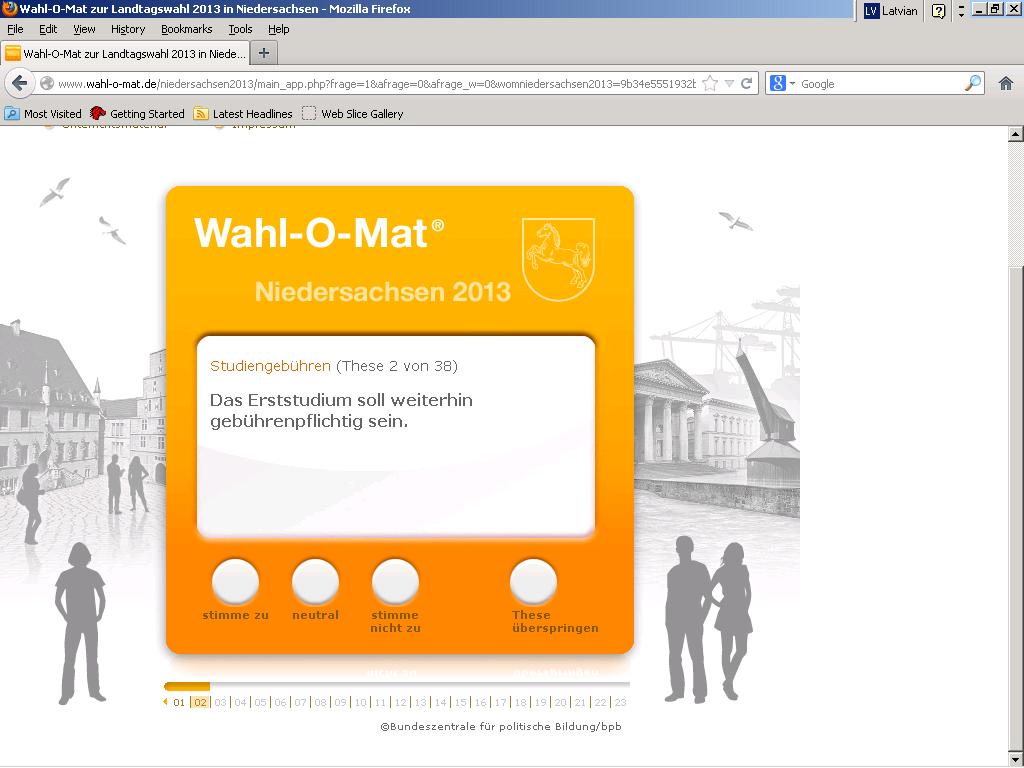 After having gone through all statements, you can select which issues are particularly relevant to you, meaning that a weight will be added to these statements in the following computation of your result. The program now compares your answer with the ones of the parties and shows you with which parties you are most in agreement. 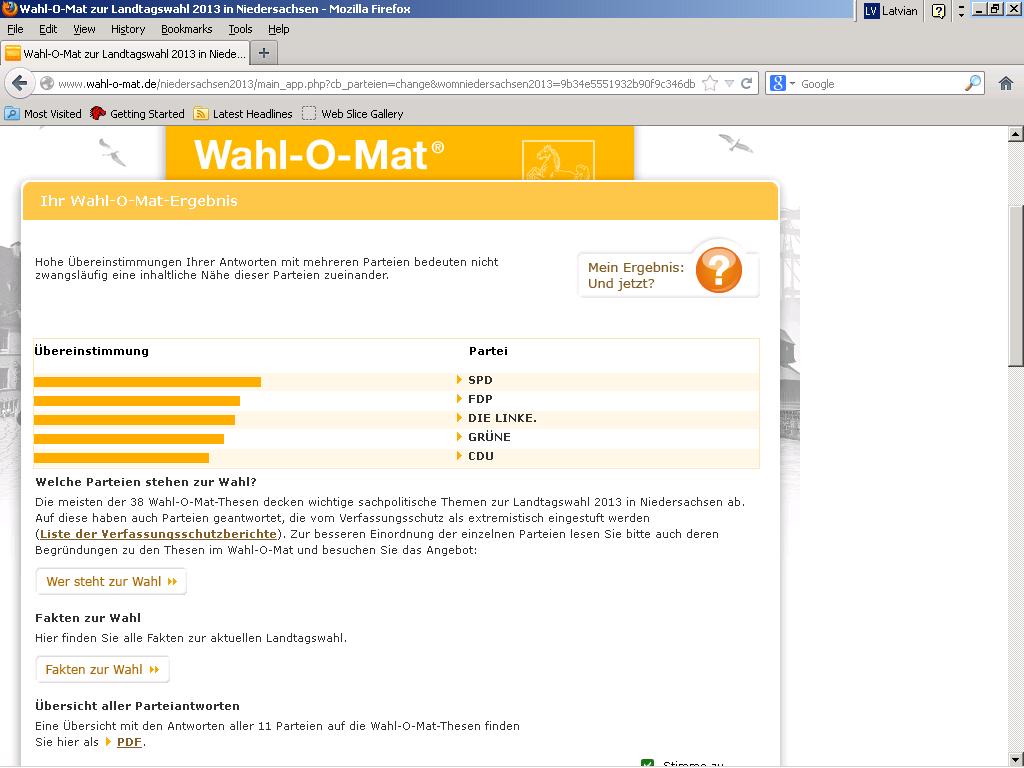 Moreover, you get an overview of how each party responded to the statements and can see them in comparison with your own answers. You also have the possibility to see brief explanatory statements by the parties in which they explaine why they answered the way they did.

In addition, the project also offers many links leading you to some political neutral background information by the German Federal Agency for Civic Education concerning each of the issues of the questionnaire, the participating parties or the elections in general.

Wahlkabine (in English: pooling both) is hosted by the Institute for New culture Technologies in cooperation with various other organizations working in the field of political education and was first established for the national elections in 2002. It is mainly available for national, European as well as federal state elections and has been used more than 2.3 million times since its start. In addition, there has been a German and Italian version of it for the last elections in the Italian province of South Tyrol, which compromises a large German-speaking minority within Italy

Wahlkabine now basically works in a very similar way as Wahl-O-Mat. There is a questionnaire of usually about 25 questions concerning the central topics of an election to which you can answer with ‘’Yes, No or Don’t know’’. After giving your answer, you have to weight the topic on 9-stage scale from ‘’not so important’’ to ‘’very important’’. At the end, a graphic is computed illustrating with which parties your answers intersect most and you can also see the answers and weights of the parties for each single question as well as short explanatory comments.

Some general information on Wahlkabine in English can be found here and also an English version for the last European elections is available. 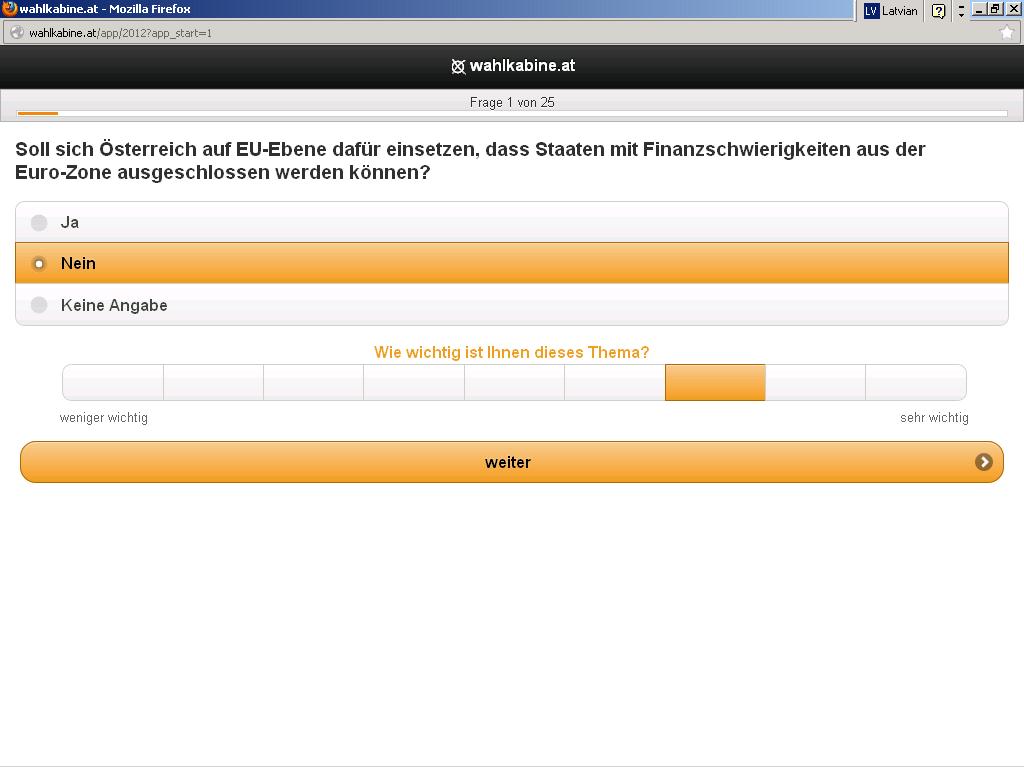 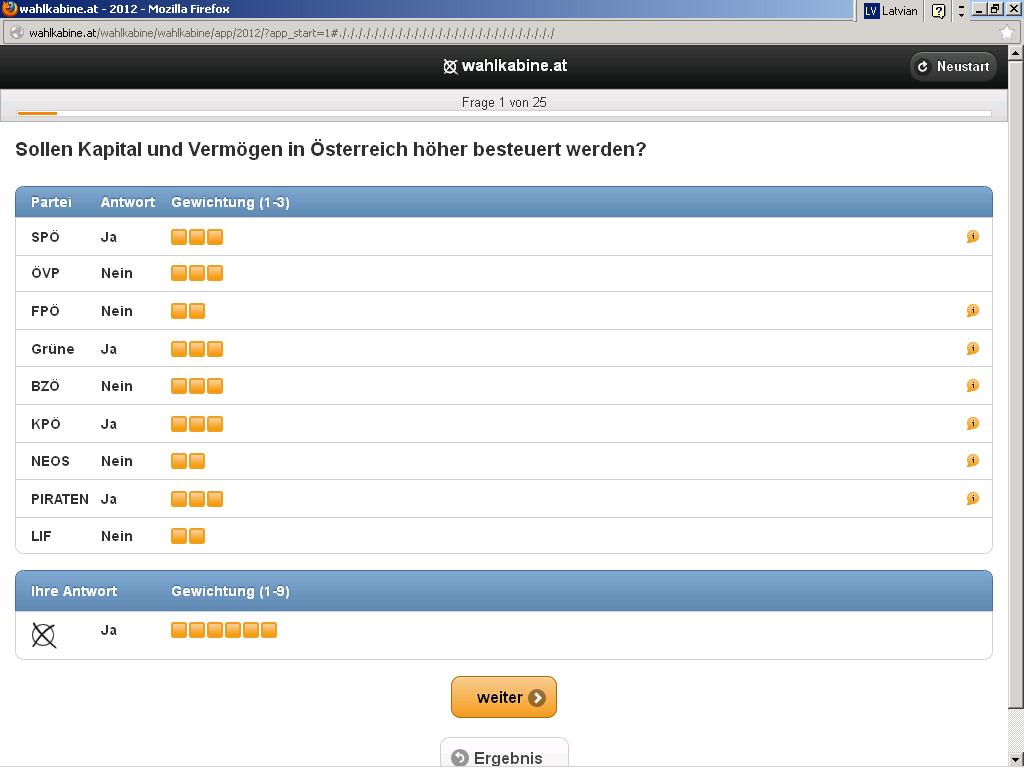 Unsurprisingly, Smartvote is based on a similar procedure. You go through a questionnaire (you can choose between a short version with about 30 questions and an extended version with up to 70 questions) with the answering options ‘’Yes, rather Yes, Rather No, No, or Don’t Know’’ and you have the possibility to weight the questions. In addition, there are usually also many questions concerning the budget of the respective entity (e.g. should the government spend more or less on military, education, etc.). Based on the questionnaire, you get an advice how to vote in the upcoming election.

However, just as it has been the case with the interactive communication platforms (see the previous entry), Switzerland is again ahead of its German and Austrian neighbors when it comes to the attractiveness of online democracy tools as Smartvote is more complex and has more to offer than Wahl-O-Mat and Wahlkabine. Thus, Smartvote does not simply compare your answers with those of the general parties participating in an election, but with the responses of the individual candidates of your constituency or the respective party-lists of your constituency. In this regard, each party-list and each individual candidate has his or her own profile page for an election including some basic information as well as the answers to the questionnaire and some explanatory comments (you can also see your own answers in comparison). 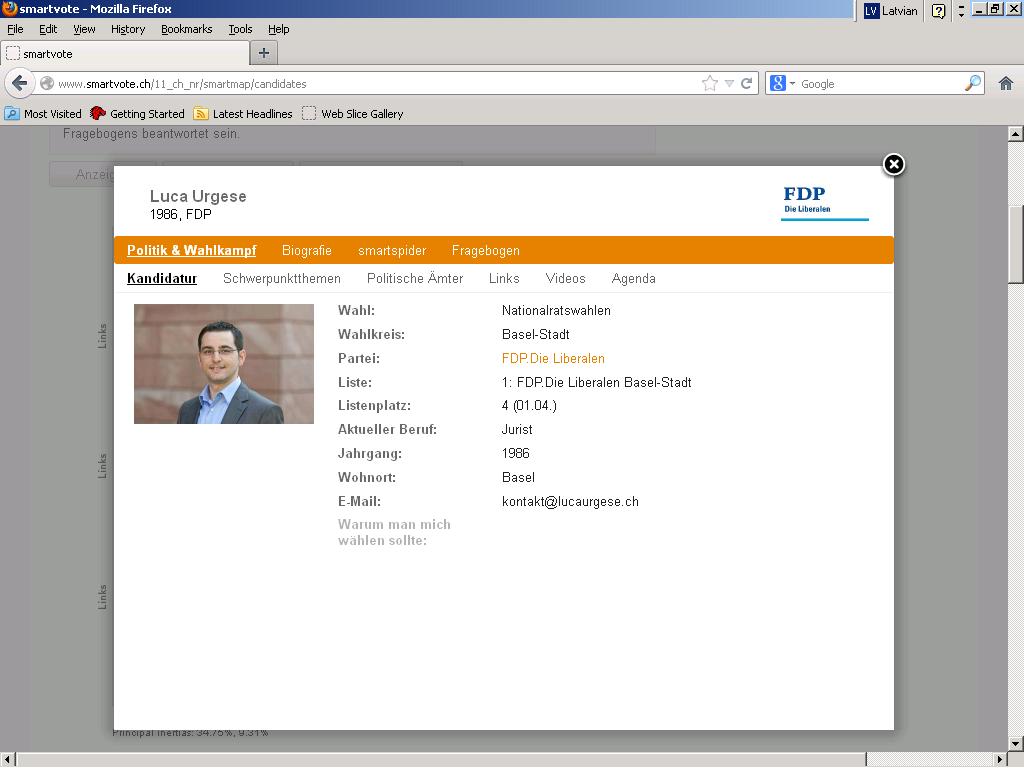 The profiles of the candidates/parties also include the so-called Smartspider, a graphic illustrating one’s political opinion based on the questionnaire by means of showing agreement or disagreement with basic political positions (e.g. liberal economic policies, open foreign policy, restrictive migration policy, strong welfare state, etc.). Your own Smartspider is also integrated into the graphics and you can see your intersections with the respective candidate/party. 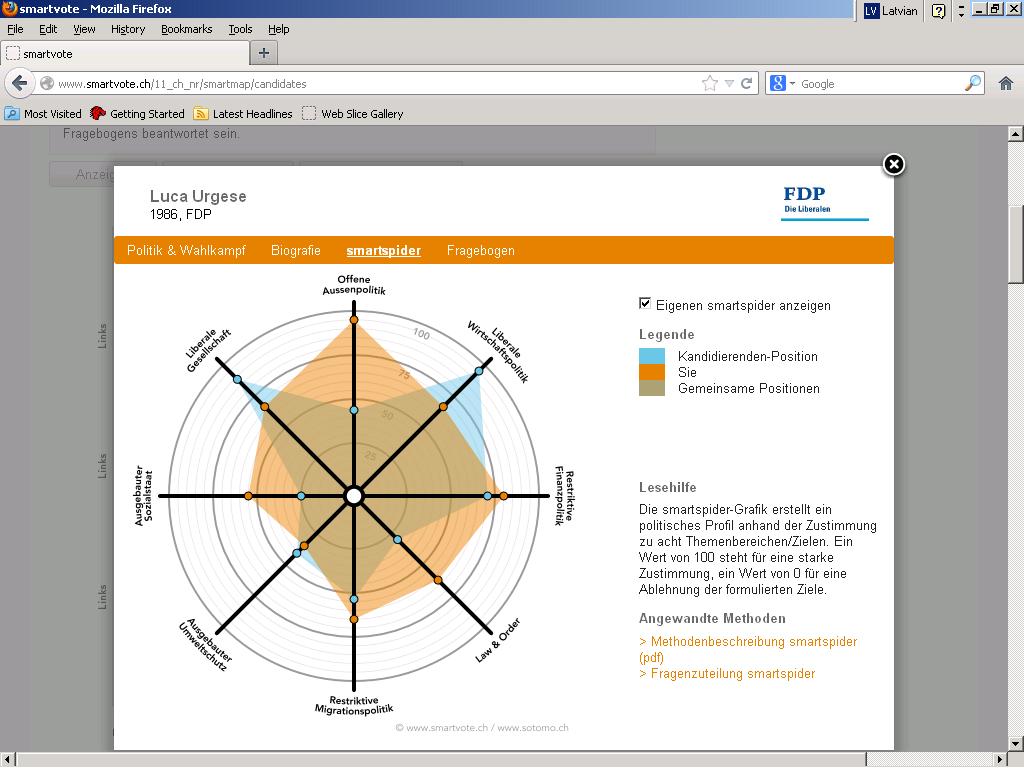 Finally, the site offers also the so-called Smartmap, a kind of shortened version of the Smartspider, illustrating your political position in a coordination system (left vs. right and liberal vs. conservative) and you can choose to compare your position with the ones of the candidates from a specific party list. 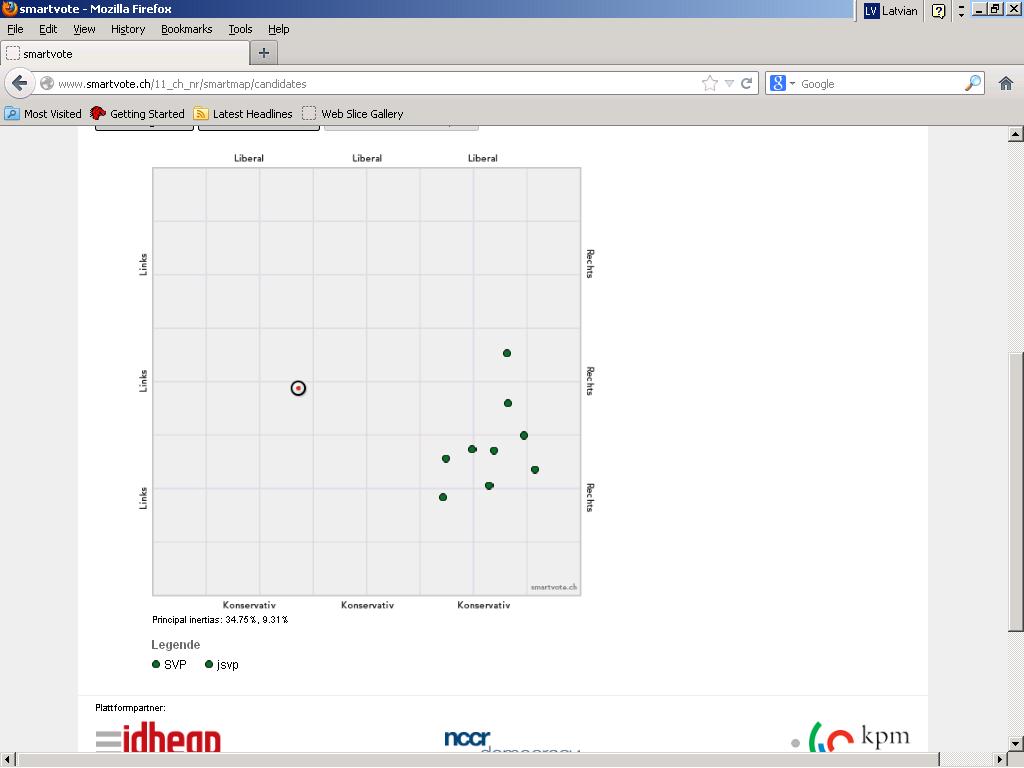 Hence, Smartvote shows you in a much more detailed way with who your answers are in agreement than its German and Austrian equivalents. By integrating profile pages and focusing on single candidates and regional party-lists, the application becomes less abstract and you can use it to actually get to know the persons you might be voting for and compare their positions with yours. Moreover, the graphics which can be displayed are certainly a nice feature. However, you also have to mention that the focus on individuals is probably to a large extent simply the result of the Swiss political and voting system, which is characterized by strong federalism and weak party discipline. Nevertheless, of course also in Germany and Austria, differences between candidates of the same party that might play role in your voting decision exist and it certainly would be interesting to have them displayed in the German and Austrian VVAs.

You can change the welcome page of Smartvote to English (also French and Italian are available) and then have the possibility to receive some information and go through some questionnaires (e.g. of the last national election) in English.

Despite their popularity, VVAs are certainly a rather controversial issue. Can they really make a useful contribution to enhancing democracy or are they just useless features that might even affect democracy in a negative way by reducing the forming of one’s political will to the answering of a questionnaire, thereby giving your decision into the hands of a machine? Since probably all VVAs work in a similar way as the ones described here, this discussion is certainly not only relevant for the German-speaking countries.

There is certainly no doubt that these applications work in a very simplified way and can by no means replace an active forming of political will. Sometimes you get rather confusing results, advising you to vote for an extremist party whose extreme views might not really be reflected in the questionnaire or your result might show strong correlation with two completely opposed parties, e.g. a left-wing and a right-wing party as the questionnaire might not really capture such complex things as ideologies, views of the world and so on. Moreover, the application cannot measure if you agree with a party with respect to a certain issue, but totally disagree with the way the party wants to tackle the problem (e.g. you might generally agree that renewable energies should be promoted more, but think that a party’s energy strategy is way to expensive).

Even if we assume that the applications really reflect your opinion perfectly, another problem is that they cannot capture your personal impression of a party’s candidates, which, however, could be important for your voting decision (e.g. would you really vote for a party whose program might perfectly reflect your personal views but you have the impression that its top candidates are totally inexperienced and incompetent?). In this regard, it is also important to mention that sometimes you might rather choose to vote strategically (concerning coalition forming) than voting for the party representing you most, because you are aware of the fact that your vote could provoke the forming of a government you want the least.

However, despite these various problems (and I think that most people are aware of them), VVAs can nevertheless make an important contribution to democracy as their intention is not to replace a proper forming of one’s political will, but rather to contribute to it. As it is also stated by the hosts of the VVAs themselves, you should not overvalue your result, but rather be provoked to take a closer look into the central subjects before an election and the positions of the parties. For example, you might always have considered yourself a supporter of a certain party, but if the VVA shows you that in fact, you disagree with many of their standpoints, you are provoked to deal closer with certain issues and maybe rethink your position or the VVA certifies your previous views and you can see it as a kind of confirmation. On the other hand, if you are a traditional swing voter, using a VVA is really helpful to get a first overview of the most important issues and the positions of the different parties before an election. Moreover, due their simplicity, VVAs can be a first step for nonvoters to become interested in politics. Hence, if used as they are intended, VVAs certainly can be a useful tool helping you with the forming of your voting decision or provoke you to vote at all.