So this is an online platform (hosted by Centre for Public Policy PROVIDUS) providing voters and general public with an opportunity to interact with the MPs and ministers.

In many ways it resembles a social networking website, like Facebook, for example, where each politician has his/her own profile, which includes a picture, Curriculum Vitae and their online appearances. Most importantly, though, it allows anyone to post a question or a suggestion to the politicians to which he/she is then expected to answer. You also get to see statistics of how active this particular politician is – how often he/she logs onto the platform, how many questions he/she answers etc.

The one thing that most certainly makes this a valuable platform for democratic participation is that the voter is given an opportunity to directly interact with a certain politician – not only via asking questions but also proposing concrete suggestions and solutions and receiving direct feedback on the proposal (provided the given politician responds and engages actively which, as observed, has by and large been the case on most of the instances). 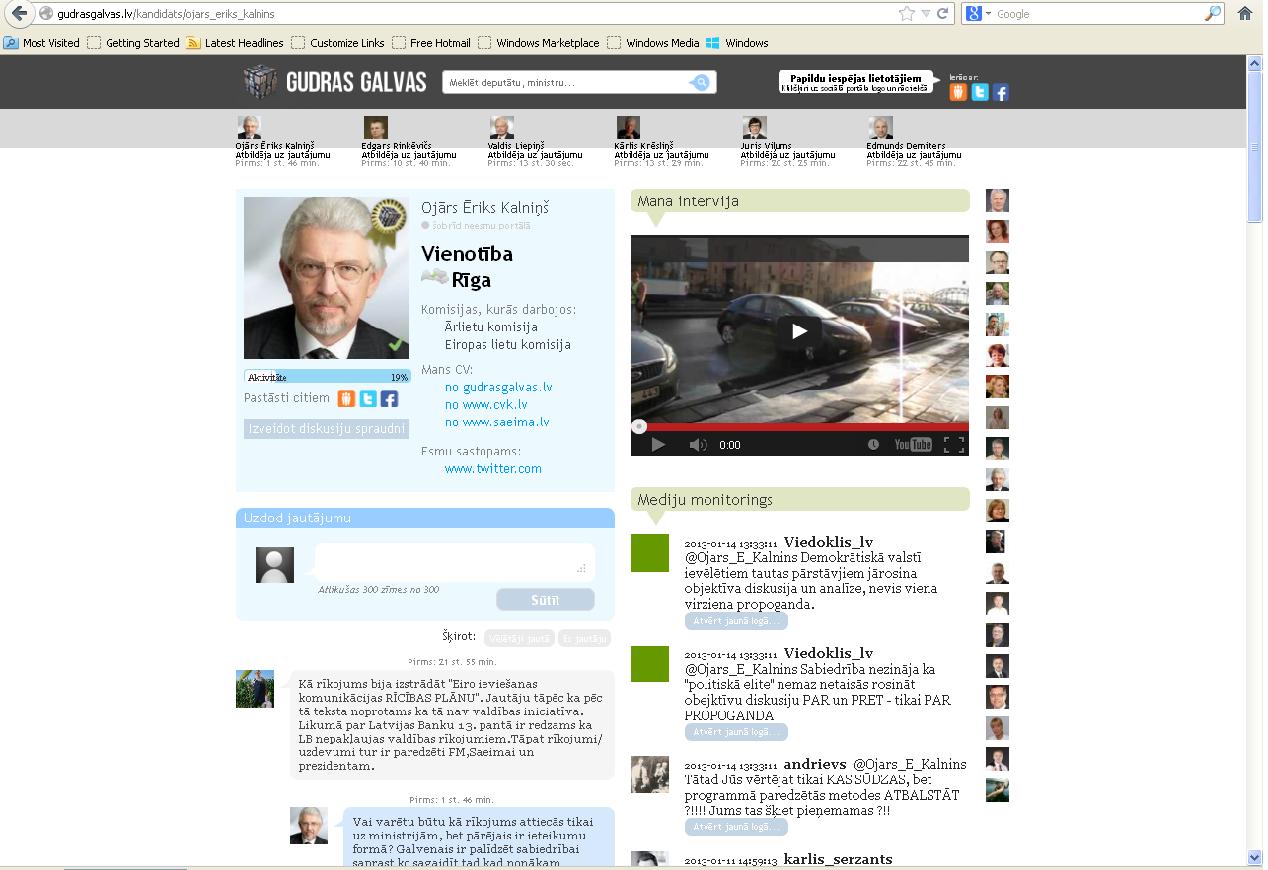 However, as the evidence shows, the web-platform becomes actively visited shortly before the elections and is relatively quiet during the interim. The question remains, how do fix this? How does one increase civic activism?

There are several additional interesting features about this website. In the screenshot below you can see three of them in the profile of a MP:

1) the MP can not only answer a question posted by a voter, but also create a survey himself/herself. He can tell the broader public about the survey via twitter or other social networks, which is exactly how this particular MP got responses to her question! Hence, this platform functions also as an e-consultation tool.

2) As you can see in this picture, this is not a strictly question-answer platform, but rather it allows a discussion to begin between a voter and a MP – this opportunity has been added to the website because the MP’s felt that they needed more opportunities to engage with their voters.

3) in the section called “media monitoring” a MP can check what is being tweeted about him or her (also their own tweets are stored here). This is one way of motivating MPs to visit this website more often. 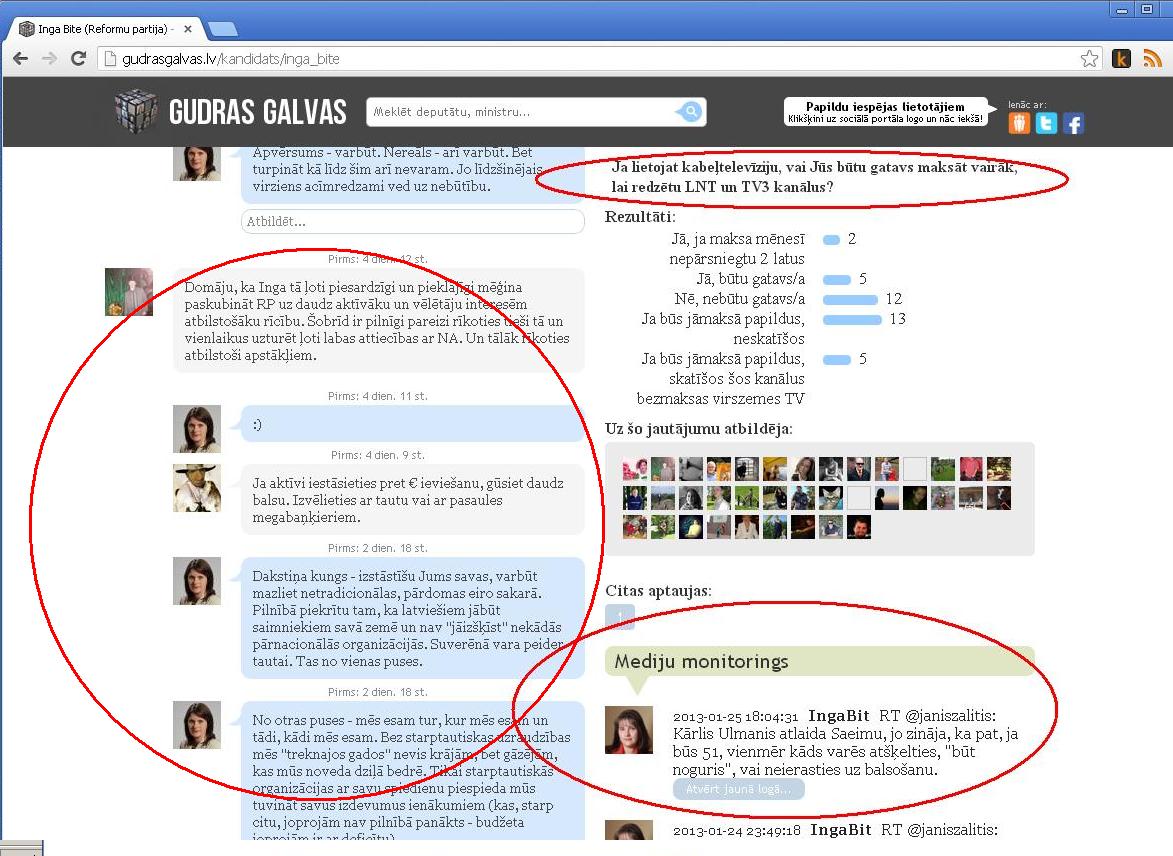 Next screenshot shows some additional “motivational” features of gudrasgalvas.lv. There are several gamification elements spread throughout the website that are intended to motivate both MP’s and voter to be more active! For example, the MP’s who respond the most to questions or create survey/blogs get an activity badge and their names turn up on the first page of gudrasgalvas.lv as the most active MP’s. The experience of gudragaslvas.lv has shown that this is quite an effective way in encouraging participation.

Each visitor of gudrasgalvas.lv can create his/her own profile. All the questions asked by that user are being collected there (it is possible to get e-mail notification whenever they receive an answer), and he/she can also see how much points she has earned by surfing through the site, by having participated in surveys, by having asked questions etc. (see, the screenshot below – that user is currently the 70th most actvie user on gudrasgalvas.lv!) On the right side of the screenshot you can see the general statistics of gudrasgalvas.lv – until this day 16347 questions have been asked to candidates and MP’s. MP’s and candidates have answered 9463. Out of 100 Latvian MP’s, 87 have logged in gudrasgalvas.lv at least once.

The audience of gudrasgalvas.lv can vote for the MP of the week. Then a short video interview with that particular MP is made available on the website. The MP can also indicate the other ways how he or she prefers to communicate with voters: for example, via Twitter, Facebook, political party page etc. 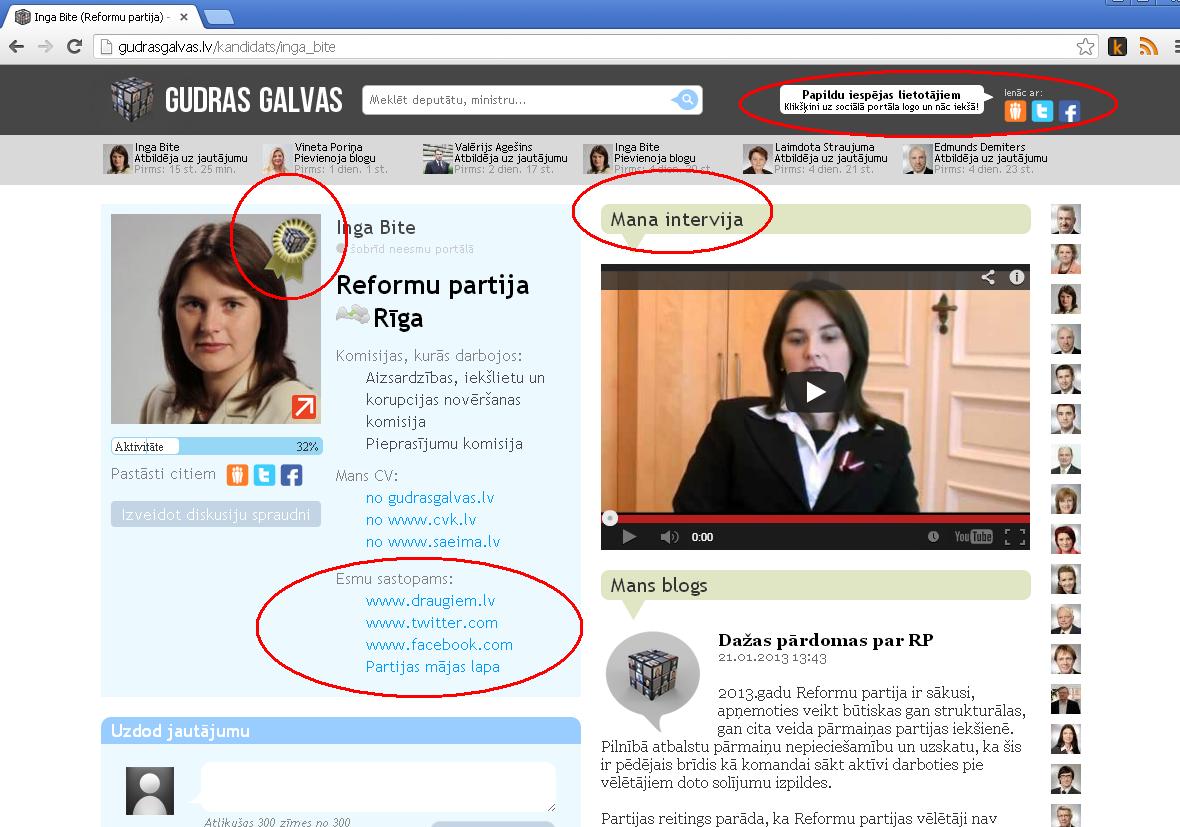 Finally, gudrasgalvas.lv also functions as an accountability tool. Most of ministers and all of MP’s took part in elections where they were asked by gudrasgalvas.lv (which at the time was functioning as a communication website between election candidates and voters) to specify their motivation in taking part in election and 3 promises they could give to their voters (see below in the screenshot). This information was kept on the website, so every voter can judge for herself whether these promises have been kept and post questions about them. In addition to that, this website is also linked with another Latvian website deputatiuzdelnas.lv where the audience can find information on whether the MP has or has not been involved in some shady deals (we will tell more about this website in the future)! 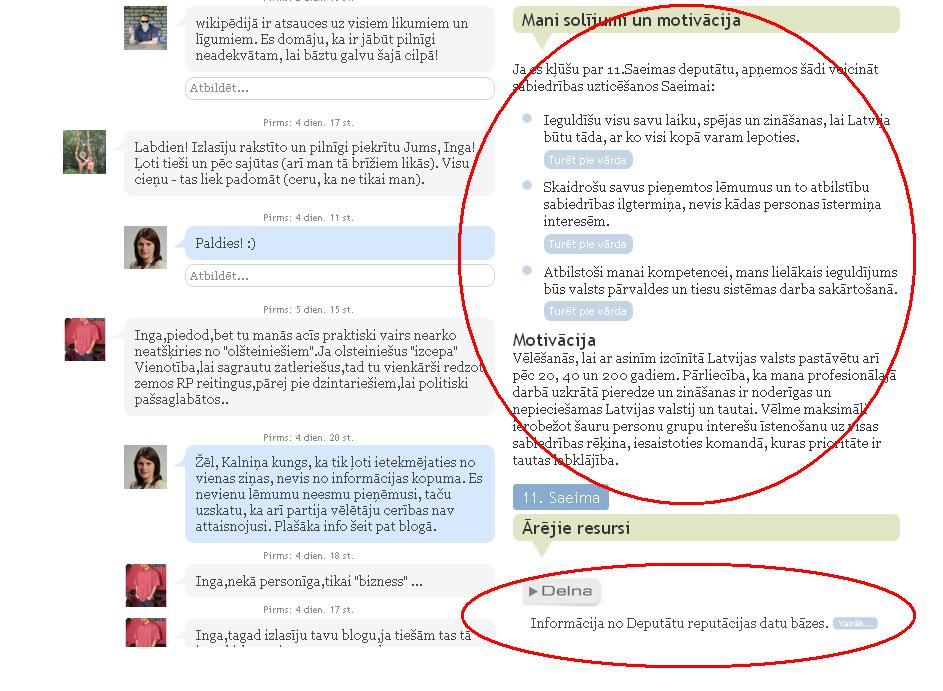 In addition, there is also a widget freely avilable on gudrasgalvas.lv that can be embedded in any other website fully integrating with its functionality – the widget allows the users of that particular website to ask questions to MP (for example, in the context of some news story). The Q&A then gets posted both at that website and also at gudrasgalvas.lv. 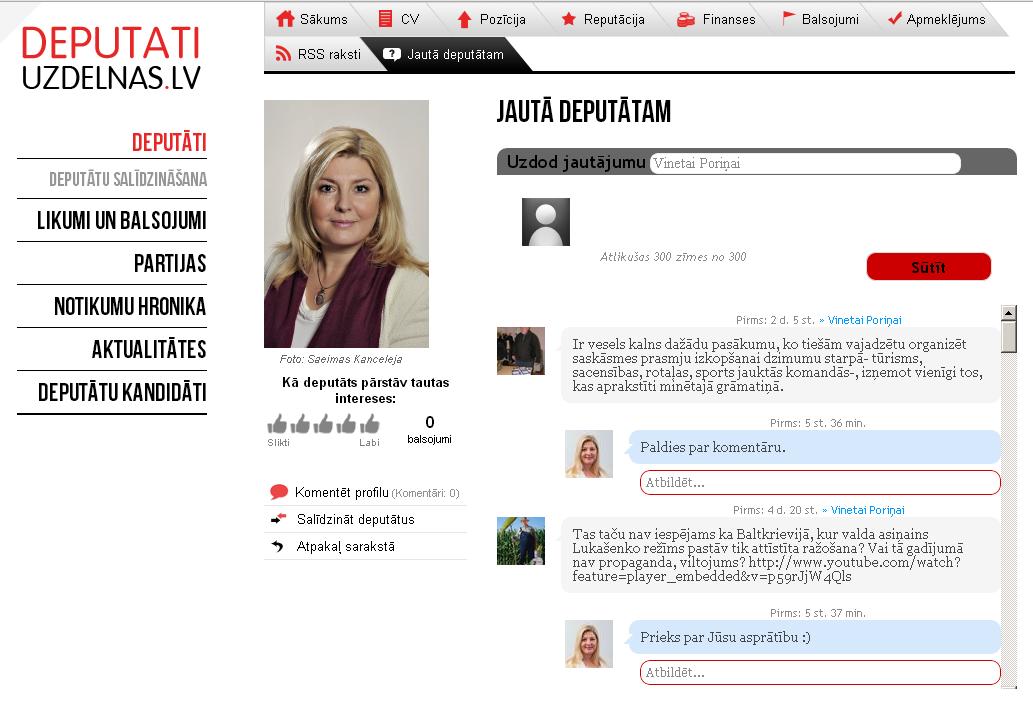 So, these are the main features of this multi-multi-purpose website …

What do you think about it? This is definitely something new for democracies – something less stiff and formal than usual parliamentary websites, there is quite a lot of youthful gamelike element integration. But is such an informal way of communicating with high officials something of benefit to democracies or not?