Building the European democracy in the web or how to engage citizens in politics?

Nothing makes the idea of transnational democracy more real than the European Parliament.

However, the persistent concern about its legitimacy has brought into the question whether a Europe-wide democratic system is really possible. Turnout of the EP elections has steadily decreased while the focus of the election debates has remained on national rather than European issues (hence the often mentioned ‘second-order’ character of elections). For the 2014 EP elections things were to change as the slogan – ‘’This time it’s different’’ – indicated, launching a campaign with goal to increase citizen participation and interest in the European Parliament politics. An important part of these efforts were several online platforms that gave the opportunity for voters to find the party and MEP that best matched their political stance, get insight into issues MEPs are debating and follow analysis by experts. If indeed development of European democracy is hampered by its citizens’ lack of interest and knowledge about it, online tools definitely provide significant possibilities to address these limitations.

Here we will take closer look on three voting advice applications that were created for the 2014 EP elections and each of whom had a separate twist. Two of them were developed by the online platform VoteWatch Europe which is a very interesting initiative itself, shedding the light on complex processes inside the European Parliament not only during elections.

If anyone was confused for whom to vote in the European Parliament elections, he or she just had to answer a set of questions and a web application advised the right party. EUvox , as the preceding application EUprofiler from the 2009 EP elections, compares to many similar platforms across the world. The principle of EUvox is simple: one had to evaluate statements that target the central issues of the European integration such as ‘’should [your] member state should drop the Euro as currency’’ as well as respond to statements like ‘’the state should intervene as little as possible in the economy’’ that located one’s preferences in more traditional left-right spectrum. The party positions earlier were determined by a group of academics in each member state. The results then showed the political party with which the user had the best match. Yet as in these tools the political parties were set in their national context without referencing the big European party families, for those well accustomed to their local politics big surprises could not arise. However, along getting more information on positions of the small and niche parties that sometimes kick bigger campaign for European than national elections, such ‘testing’ could also be chance to see the national parties in a new light through their stances on the EU issues.

Slightly more informative was a complementary project, the Votematch Europe, that not only gave chance to find specific voting e-tool in your country (if it had one) but, as these different country projects worked with the uniform set of twenty statements designed by the Votematch team, to also see how the party stances matched across the EU. 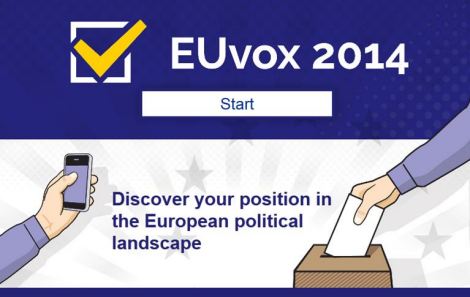 Another voting tool for the EP elections was MyVote2014.eu, orientated on the younger generation of voters. Yet it had another exceptional difference. Whereas EUvox used a well-known mechanism of using party manifestos and statements for determining the party positions, in MyVote2014 their actual voting behaviour was used. MyVote2014 was based on VoteWatch Europe data (about which in a brief moment) and matched the vote ‘casted’ by the user with actual MEP votes on various issues. Example includes ‘’ should the EU strengthen and extend its internal market for services?’’ In such way you could find out your most like-minded member of the European parliament! It therefore was more introductive to European political scene, by asking to value statements that MEP’s are voting on and see stances of politicians across Europe not just national candidates. 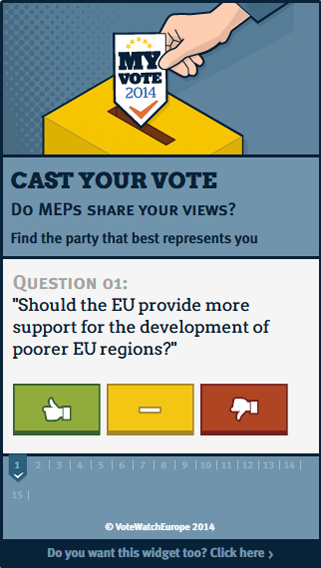 The third platform Electio2014.eu, as the EP 2014 election hub of sorts, integrated elements from both EUvox and MyVote2014 to supplement it with up-to-date commentary by academicians, civic activists and politicians themselves. It also provided possibility to match your vote with the MEPs, evaluate and vote for the European Commission presidential candidates (main innovation of the 2014 elections) and follow news and analysis on elections. Interesting feature of the site was chance to compare votes submitted by users to outcome of the actual vote, giving a glimpse on how direct democracy would look like on a European scale.

Thus, the 2014 European Parliament elections showed some considerate and promising approaches in e-democracy tools to advance voters’ knowledge about European politicians and parties, and to increase overall interest in the elections. While the low turnout trend was maintained in these elections, the crucial idea behind the Europe-wide democracy – to connect European citizens with the parliament – was quite admirably realized through these internet platforms. Their potential is only unfolding. 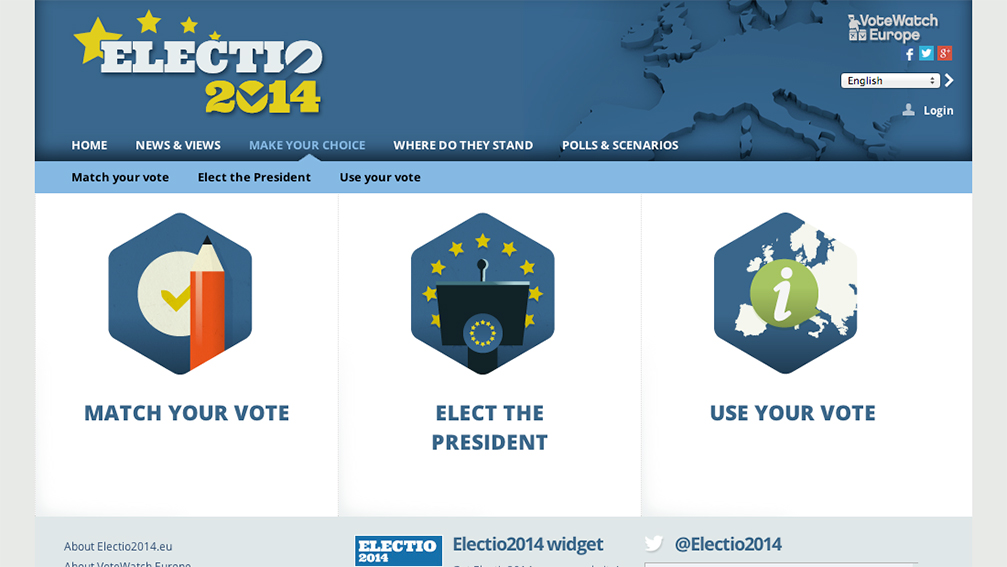 Little of that would be possible without VoteWatch Europe. A NGO, started in 2009 by group of academics from London School of Economics and New York University, has developed an internet platform that allows to follow the voting and attendance in the European Parliament and the EU Council of Ministers. Collecting the information from institution websites directly, it makes the EU political decision making more accessible for both specialists and the wider public. The 2014 EP election vote-matching platforms was a great example how the VoteWatch data can be used to bring the seemingly abstract work of the EP closer to the general public. It is even more so when these data catch attention from the media, such as in this The Guardian article about UKIP’s as the ‘laziest party in the Europe’ , inquiring into party’s attendance and voting practices.

VoteWatch makes possible to observe the political process in the EP: from individual MEP activities in drafting laws, making reports, attending and voting to party politics by seeing what coalitions are formed in what issues. As in the most traditional conception of democratic accountability, VoteWatch checks and provides information on actions of the parliament. Only now it refers to European level.