For most young people politics has never been a hot topic. A 15-year old Briton named Jeremiah Emmanuel said that before he took an interest in government to him it was just “a room with green seats and a load of men shouting at each other,” and sadly these kinds of statements can be heard from young people everywhere. It should be no surprise than that the youths involvement in politics is meager at best.

Take Britain for example, in the 2010 general election, only 44% of people aged 18-25 voted, compared with 65% of people of all ages. And while young people might not know it, the consequences of their detachment can have a considerable impact on their everyday life. The most vivid example is the coalition governments decision after the 2010 election to increase tuition fees, which was seen by many young voters as a betrayal by the Liberal Democrats who just months before had signed a pledge vowing to vote against any such increase. It is events like these that lead to young Brits becoming frustrated with politicians and discouraged to participate in their countries decision-making process.

That is why democratic youth organizations that mobilize the young voter are becoming evermore important and one of these organizations is called “Bite the Ballot”. Based in the UK, “Bite the Ballot“ is a non-partisan movement which empowers young people by educating them on government and encouraging them to cast their vote. Formed in April 2010 by a business studies teacher David Hughesman and Michael Sani,, “Bite the Ballot” does not lecture young, potential voters with the old argument “if you don’t vote, don’t complain” but rather shows them that they have the power to actually change things. The youth organization is able to appeal to young citizens by employing modern technology and demonstrating their own credibility and understanding of the subject. 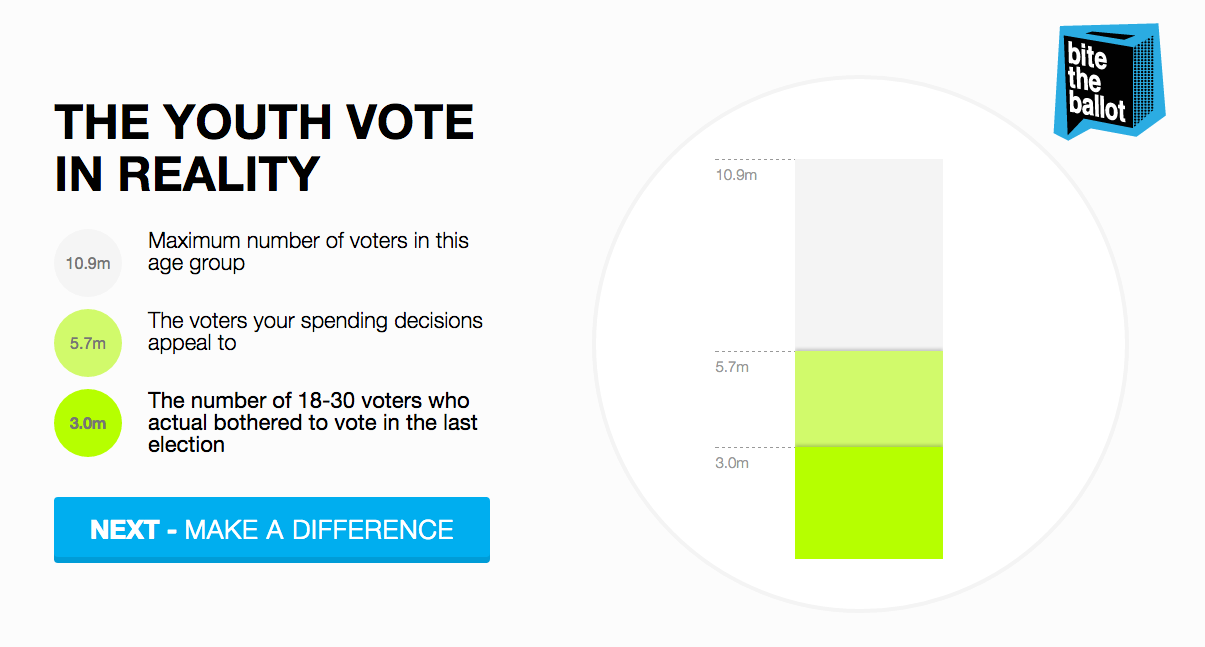 By explaining the primary functions of lawmakers in an engaging way, “Bite the Ballot” changes the way that young people look upon politics and politicians thus encouraging them to vote. This is most evident when playing the online game called “#TheBasics”, where young people are put into the shoes of the lawmaker and tasked with setting Britain’s budget. At first the player has to allocate £100 across key areas and then, due to a crisis, revise his spending and cut £25. In addition to this, the player is shown the consequences of reduced funding in a certain area and how people from different age groups will respond to his decisions. For example, if you were to decrease education spending, you would see a decline in the approval rating among young citizens as well as the amount of teachers that will be laid-off because of the cuts. The lesson – politicians cannot please everyone, all the time. “Bite the Ballot” wants the player to understand this because it goes to show that sacrifices have to be made for the greater good and lawmakers are the ones making these tough decisions. It teaches the player that when it comes to politics, expectations have to be managed, otherwise politicians will always let you down and as a result you will distance yourself from any kind of involvement. In Britain this is a core problem because political parties are the top most hated brands, especially amongst young people. For instance UKIP, a political party, was cited by 58% of 18-to24-year-olds as the brand they most hated, closely followed by the other major political parties.

However, “#TheBasics” does more than inspire empathy. The main message comes at the end of the game when a bar chart appears and shows the maximum number of young voters in the UK (10.9 million), the number of young voters that actually bothered to vote in the last election (3 million) and the number of young voters who would support the players spending decisions. The trick is that even if the player made a perfect budget that was supported by all 10.9 million young voters, only 3 million would cast their ballots and try to put him back in office. Now, the player asks himself: “why did I even try?” and for young citizens, this realization is crucial. It explains why in the eyes of politicians they are more or less expendable, and makes them understand that this can only be changed by showing up on election day. It also appeals to an especially important aspect of a young persons life – independence. Rather than using the old argument “if you don’t vote, don’t complain”, “#TheBasics” shows that if you don’t vote, you don’t matter. This gives the player an actual incentive to go and vote, because it will show that he is capable of deciding what is best for him and his community. However, if he stays home on election day, he is allowing others to determine what his life should be like, and there is nothing that a young person hates more than being told what is best for him. 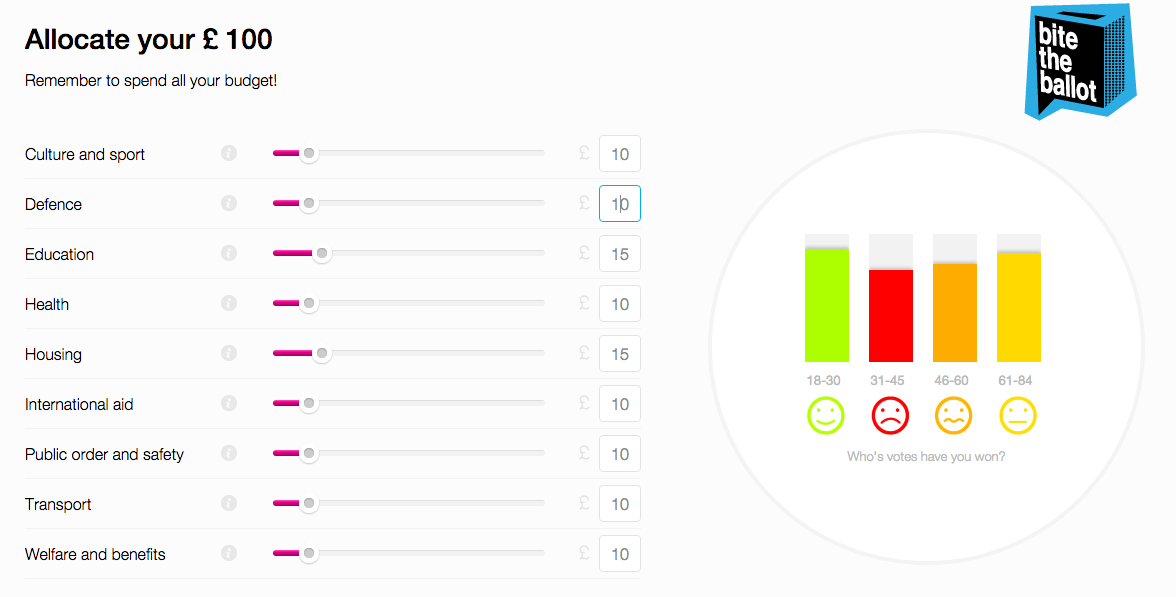 But “Bite the Ballot” does more than encourage young voters to vote. It also provides credible and easily accessible information about political parties and their agenda, in a way that is captivating to the young audience. The perfect example is the recently released digital tool “Verto”. “Verto” is the worlds first voter advice application for young people created by “Bite the Ballot” and “Demos”, a cross-party think tank. It matches a person’s beliefs with the policies of different political parties, by analyzing their responses to statements about multiple issue areas such as jobs, healthcare and the economy. For young, inexperienced voters this is helpful because from their perspective the landscape of modern day politics is extremely complicated. A lack of political schooling, confusing, oftentimes impartial media coverage and convoluted speeches given by politicians are the main barriers that prevent young citizens from fully understanding each party’s agenda. As a result they are less likely to vote, and more likely to make an ill-informed decision when voting. That is why “Bite the Ballot” focused on two things when making “Verto” – simplicity and credibility. By working with focus groups all through development, “Bite the Ballot” has ensured that the app is simple, fast and intuitive which is incredibly important if your target audience are young modern-day citizens whose attention is hard to grasp. Therefore, when using “Verto” it does not feel that you are using a complex political tool, but rather a lifestyle app which tells you which restaurant is most likely to satisfy your wants and needs. To ensure that the information about each user’s beliefs is accurately analyzed and matched against a political parties agenda, the youth organization researched statements, speeches, policy documents and even hosted a 10 person academic panel in association with the political studies association. After that they presented their arguments to policy managers from all 7 parties to ensure that their agendas are accurately presented. It’s this kind of social responsibility and innovative thinking that convinces young people that participation in their countries decision making is easier than they thought.

“Verto” and “#TheBasics” might seem like small projects, aimed at mobilizing young voters, but they are a part of something much bigger – a change in how citizens involve themselves in democracy. Politics is the last frontier in civil life which has not experienced a surge in technological innovation and now that is changing. With only an internet connection, people can access digitalized tools such as “Verto” and “#TheBasics” and learn about the intricacies of government. As these applications develop, the social mobility of citizens will increase exponentially and the disconnect between the voter and the politician will decrease. Young people will be at the forefront of this and they will be the ones to change the way future generations look upon politics. That is why organizations such as “Bite the Ballot” are so important. They shift the narrative and teach young people that participation and social responsibility are the cornerstones of any democracy.