In a previous post the Latvian website Gudrās Galvas, an online platform allowing citizens to communicate with politicians, has already been introduced. Now, what about the situation concerning such tools of communication in the German-speaking countries of Germany, Austria and Switzerland? What possibilities to communicate with their politicians do the citizens of the German-speaking world have and how useful are the communication platforms in these countries?

Abgeordnetenwatch (in English: deputy or parliament watch) is an independent online platform allowing citizens to pose questions to representatives in parliament. Originally limited to the federal state of Hamburg, Abgeordnetenwatch today compromises the majority of deputies of the national parliament, the European parliament, 9 of 16 federal state parliaments as well as various municipalities. When there are elections, candidates can join the site and be consulted, too. Each day, about 10.000 people visit the site. Some general information in English can be obtained at:

How does it work?

Each participating representative has a profile (see below), mainly including some basic information concerning his or her political activities in parliament. 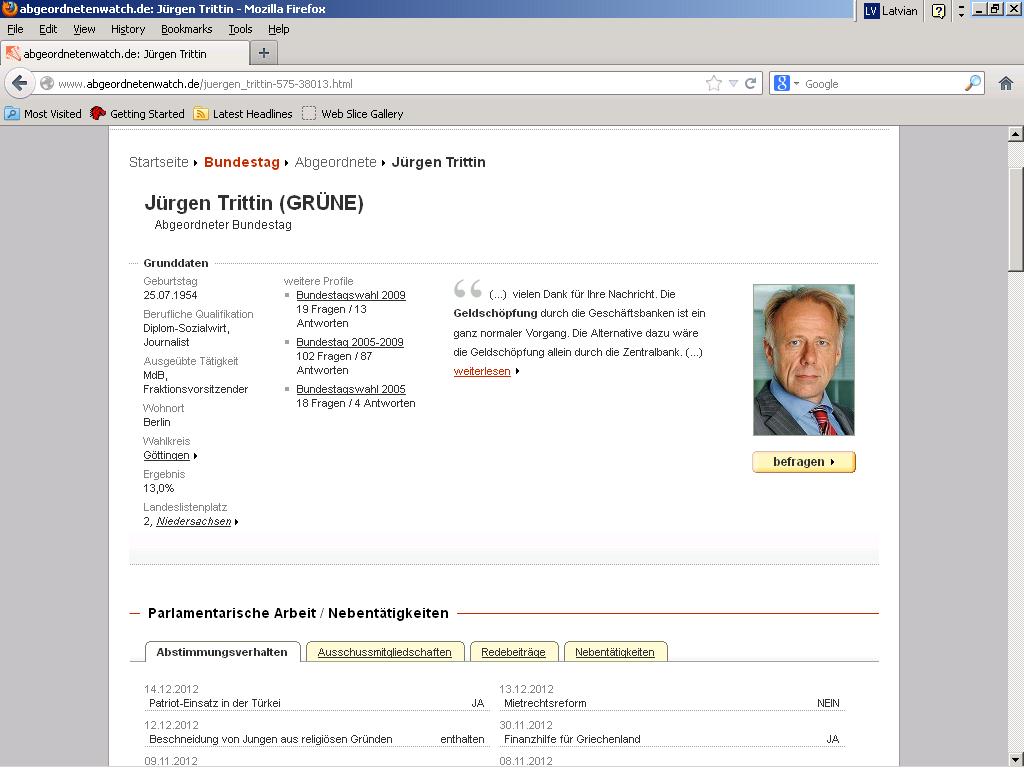 If you have a question to a specific deputy, for example, you might want to contact the deputy of your constituency in the national parliament, all you have to do is to go to his profile and click the link to the question formulary. All questions posed and the respective answers are shown at the profile page of each politician (see below). 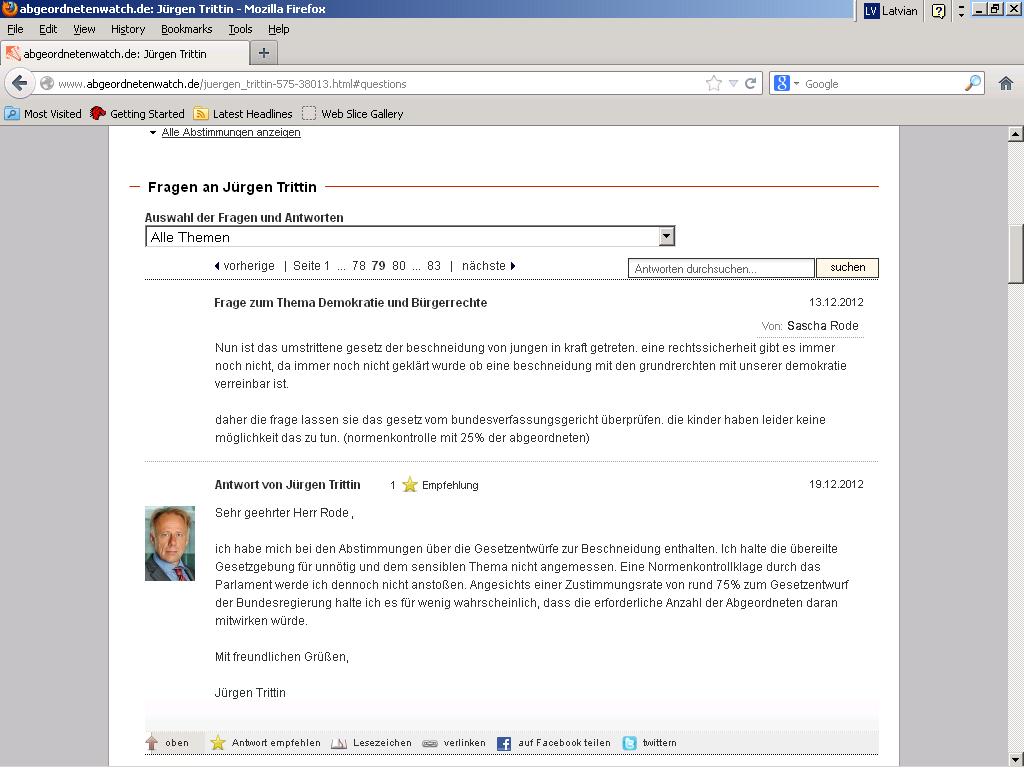 What is it good for and what could be improved?

The site gives citizens the possibility to directly contact representatives with their questions or concerns and the majority of politicians do indeed answer most of the questions they receive. Just like questions and answers appear on the site, people can also look at the questions of others and the respective answers so as to inform themselves, or maybe also become inspired to post a question of their own. Politi­cians on the other hand, get an overview of what really concerns the people and can demonstrate their expertise and willingness to help them. Hence, Abgeordnetenwatch can be regarded as a kind of center for channeling the online consultation process be­tween citizens and politicians and therefore certainly makes a valuable contribution to enhancing democracy and transparency in Germany.

Unfortunately the site is solely focused on a question-answer process. According to the general terms and conditions of Abgeordnetenwatch, each enquiry has to be formulated as a question. Neither politicians, nor citizens have the possibility to express an opinion on their own behalf and there is also no possibility to comment on a certain question or answer. Thus, real discussions between citizens and politicians cannot take place. Extending the project by finding ways to allow for an actual dialogue between citizens would certainly make the platform even more interesting.

Meinparlament (in English: my parliament) is a kind of Austrian version of the German Abgeordnetenwatch and was also set up with the help of the Abgeordnetenwatch team. Hence, it is no surprise that it basically works in the exact same way and also uses a similar layout (see below). 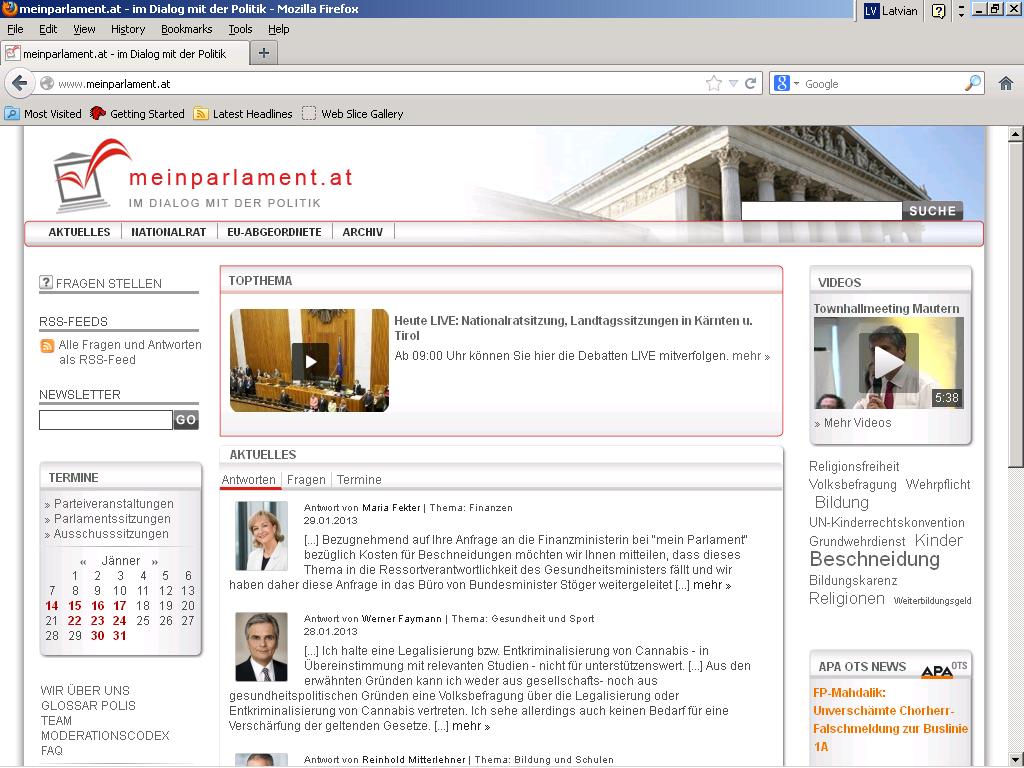 The only real difference between the two platforms is that Meinparlament does not include representatives of regional or municipal parliaments, but only representatives of the national and European level. However, in contrast to Abgeordnetenwatch, Meinparlament also has a section compromising all the members of the Austrian government including the Austrian chancellor. Hence, the chancellor and the ministers can be contacted just like any other member of parliament. Although there are also a few ministers on Abgeordnetenwatch, they do, however, seem to be less active than an average politican. Meinparlament can therefore also be regarded as a real contact point to the Austrian government.

The Swiss website Politnetz (in English: political net) is certainly the most interesting communication tool in the German-speaking countries. It is an independent platform, allowing for an actual dialogue between citizens and politicians. Currently about 3000 politicians including members of parliament from the national, regional and municipal level as well as various other politicians (e.g. youth politicians, candidates) and 15.000 ordinary citizens are registered. Last year the project was awarded with the Data Journalism Award by the Global Editors Network, illustrating its importance and innovative power.

How does it work?

Politnetz now follows a completely different approach compared to its German and Austrian equivalents as it is not a tool for consulting politicians, but rather a platform where citizens and politicians can express their opinion by publishing articles on political issues or comment on the articles of others and consequently engage in a discussion. As ordinary citizens have the same right to publish articles and leave comments as politicians, it might be regarded as a form of democratic or citizen’s journalism. In addition, the platform includes some elements of social networks such as Facebook. Below you can see how the system works. A member has written an article on family policies. After clicking on the article and reading it, you can leave a comment and give your opinion on the issue to which the author or other members might in turn react. You can also express your support for an article by clicking on ‘’like’’. 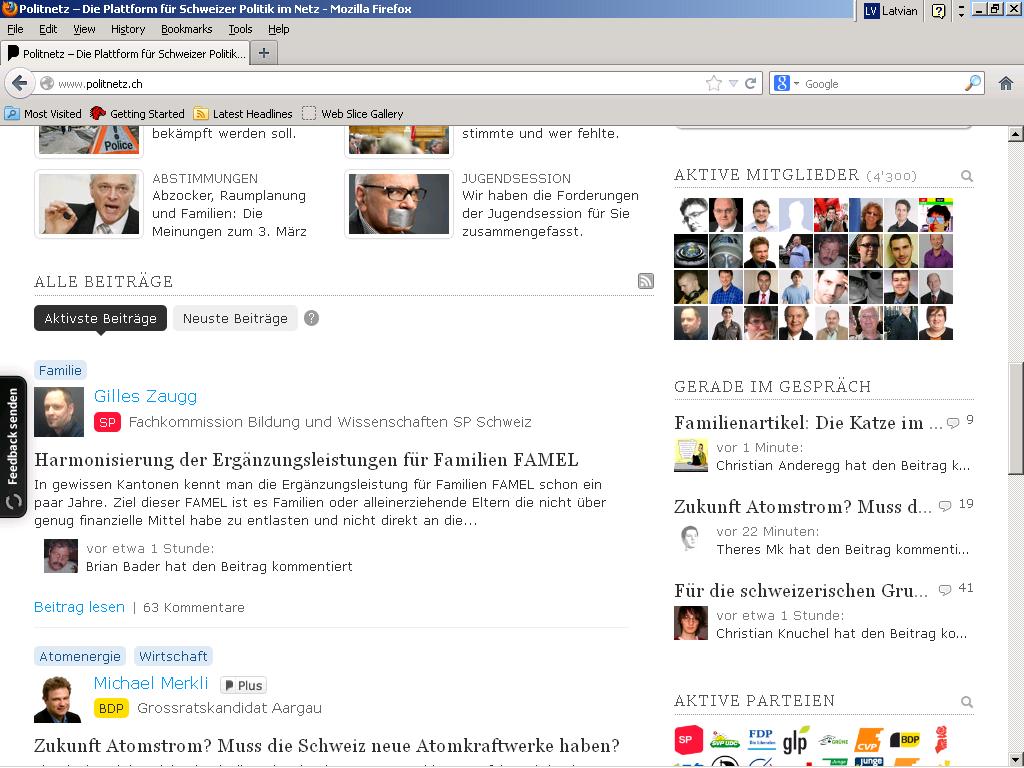 Given the importance of direct democracy and the frequent holding of referenda in Switzerland, the following feature of the site is also very interesting. Members can write short statements on how they will vote in the referendum and Politnetz contrasts the pro and contra statements with each other (see below). 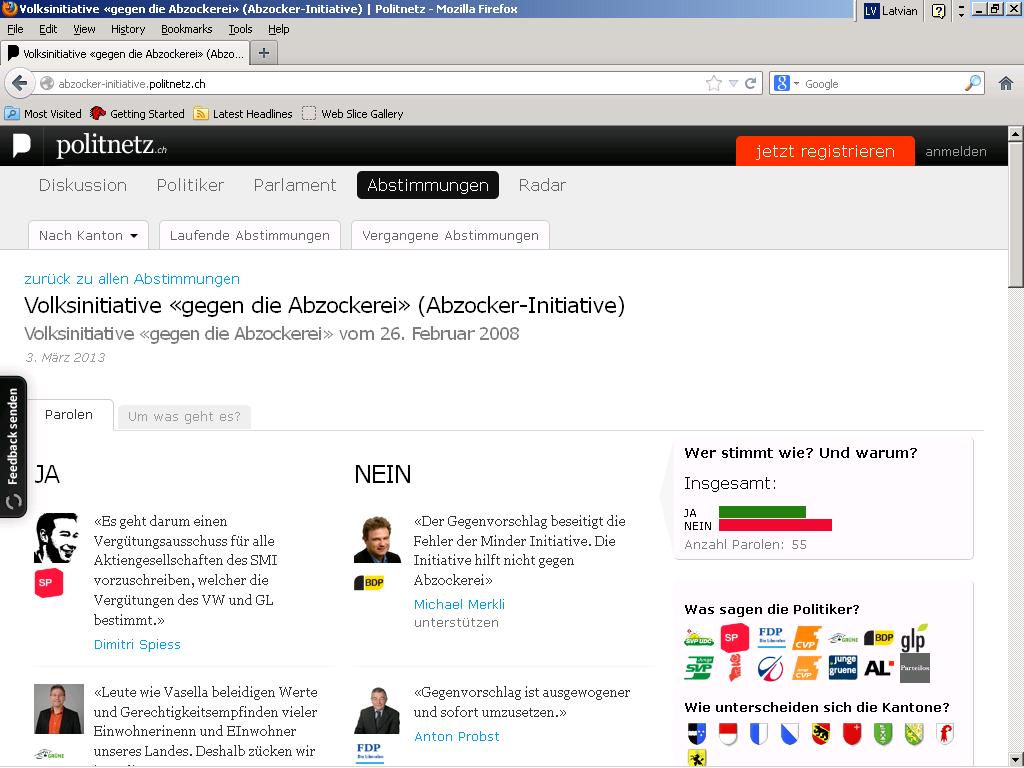 In order to publish articles and participate in discussions, you have to create an account or register via Facebook. Each member of Politnetz, politicians as well as the ordinary citizen, has his or her own profile page (see below) including some basic information and an overview of all articles written. Moreover, members have the possibility to embed their Twitter account in their profile and you can also subscribe as a supporter and follower of a politician. 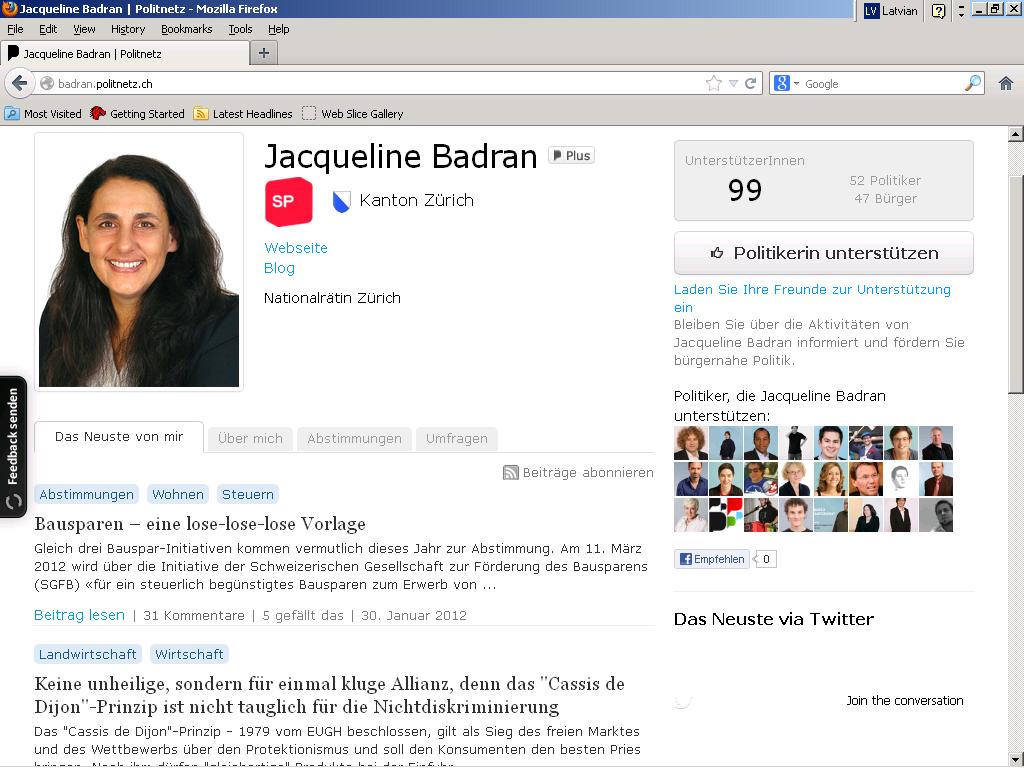 What is it good for and what could be improved?

What makes Politnetz so interesting compared to Abgeordnetenwatch and Meinparlament is that citizens and politicians can actually have a real discussion, which also takes place on absolutely equal terms. Rather than finding themselves in a kind of inferior role requesting something from a politician, Politnetz gives citizens the possibility to tell the public and the political class their opinion on a certain issue or to react to statements written by politicians. To give an illustration: whilst sites like Abgeordnetenwatch function like writing a letter to a politician, which is then made public (and the answer as well), Politnetz is like attending a speech from a politician and discussing with him or her publicly afterwards or, changing the roles and giving a speech on your own which can then be commented by politicians. In turn, the site gives politicians the chance to present themselves, promote their ideas and get input from the citizens.

Browsing through some discussions shows that the system really works. Various articles are published regularly and citizens and politicians often have a lively debate. Sometimes, it is also interesting just to see how politicians comment on each other’s articles, like watching a political debate on TV with the important difference that you can join the discussion any time if you wish. So you can say that Politnetz fulfills an important role in taking the traditionally already very open and democratic political system of Switzerland to the times of the information age.

What could now be improved? Well, I really think that there is not much to improve at Politnetz. However, a simple consultation function as offered by Abgeordnenten­watch and Meinparlament would nevertheless be nice to integrate into the website since the comment section under articles is not really suitable for general questions. Given the ‘’Facebook-like’’ style of the site, a message board on the profile page, similar to the Latvian site Gudrās Galvas, could fulfill this function. Moreover, the site could also try integrating government representatives from the national and regional level (at least I couldn’t find any).